Catholic Church covers up butchers among its clergymen 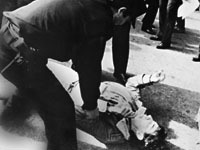 Russia only plans to introduce the service of chaplains, although clergymen already serve in the armies of many countries of the world. It is an open secret, though, that military men do not always perform the function of defenders, who can be relieved of the sin of murder. What clergymen should do if soldiers take part in punitive operations? Is the Church supposed to defend the chaplains, who serve both to God and the state?

The military dictatorship in Argentina was the bloodiest and most ruthless in Latin America. Over 30,000 people were either killed or went missing from 1976 to 1983.

In 2007, Christian von Wernich, a Catholic priest, was sentenced to life in prison. The officer was found guilty of seven counts of murders, tortures and kidnappings. During the years of the dictatorship, he was a pastor at Ramon concentration camp. Afterwards, he served as a chaplain for the chief of security service of Buenos Aires.

It turns out that former chaplains still serve to God in Argentina. Church authorities help the retired clergymen, who cast a slur on their reputation, find work at civil curacies.

The whole Argentina has been following the story of the Alberto Zanchetta, a former chaplain recently. The congregation perceive him as their pastor, but he continues to move from one curacy to another. In 2007, Zanchetta was sent to work at the Argentinian peacemaking contingent in Haiti. The priest was working there until his activities during the years of dictatorship were made public.

It was revealed that Zanchetta was bestowing blessings upon the pilots of the so-called death raids. Military men would arrest people on the ground and make them board the "death planes" where the people would be drugged and then dropped into the ocean from high altitudes with weighty items chained to their feet.

The pastor was exposed by one of the pilots. "He told me that it was a Christian death. A war is a war, and the Bible says that the wheat must be separated from the chaff," the pilot said.

In 2009, after Pagina 112 newspaper and other Argentinian media published articles about the military crimes of the pastor, Zanchetta was dismissed. However, he was not deprived of his pension and his church title. He has changed several curacies under the protection of church authorities since then: parishioners would recognize him and protest his presence in their congregations. The Church would simply move Zanchetta to another region of the country, where he would continue his work as a pastor.

This is not the only incidence, when chaplains were involved in mass murders of people. In 2009, four pastors of the Catholic Church were charged with genocide of 1994 in Rwanda, when extremists of Hutu tribe exterminated over 700,000 members of Tutsi ethnic group. One of them, Emmanuel Rukundo, took a direct participation in the killings and was sentenced to 25 years in jail. The former chaplain supposedly said: "Tutsi are the people who should be wiped off the face of Earth. We must fight against them using all possible methods."

Late Pope John Paul II said in 1996 that the Church could not be responsible for the crimes of its sons. It just so happens that the Vatican supports the criminal chaplains, although the Church had the power to prevent the crimes.

Russia's Dmitry Medvedev signed the decree about army clergymen in 2009. Defense Ministry officials said that there were 240 clergymen put on service in the Russian troops. Muslims may raise the issue of their own military chaplains too, which may lead to religious fights in military units.