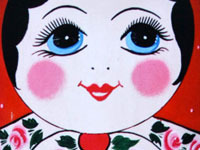 The "Russian Dolls" reality show about the Russian immigrants living in New York's Brighton Beach was created by two young American females of Russian origin. They told journalists that the show was based on their childhood memories. "We spent our childhood far from Brighton Beach, but we remember our trips to the "Russian mecca" very well," the women told US journalists.

The events of the show take place in Rasputin, a Russian night club. The owner of the club is Marina, a 34-year-old woman. According to the scenario, the owner of the club wears fur and diamonds all the year round. Marina and her husband Mikhail, who also works in this club, know everything about the life in Brighton Beach. Marina can not get along with her mother-in-law, Eva. She finds it very entertaining as Mikhail's mother is trying to get used to living in America. When Eva decides to take part in the traditional contest of grandmothers, Marina and the organizers of the contest can only make fun of her. One of the members of the jury tells Marina: "The grandma is doing her best to make it to high society. But she is nobody."

Another outstanding character in the show is Anastasia, a brunette woman with heavy makeup. College, career, family and children have never been in her plans. She spends her days in fitness clubs and sun parlors. Her biggest problem is her hairstyle. The woman spends a lot on hair extensions and worries a lot about it. Nastya is nearly 30, but her mirror is still her best friend.

Where there's a brunette, there's also a blonde. Diana, a 23-year-old blonde, dreams of Prince Charming on a white horse. She wants to marry the prince who must have a very expensive car and a very thick wallet, or rather very thick wallets. He will be paying for her everywhere. Diana will only have to be dazzling.

Anna is another character in the show. She is a photo model, who opened her own modeling school. However, the woman lives in a tiny apartment in Brighton, which she shares with her parents and grandmother.

As for men, there is Eddie - a professional gigolo and womanizer. The ambitious young man is very good at breaking women's hearts. He also likes to live at the expense of his lovers.

Another man, Alexander, works at a jewelry shop. When he comes home at night, he faces insults and humiliations from his wife of 30 years.

The Russian characters of the show lead boring lives. Their only interest is money, and they don't know how to spend it. Their entertainment is all about boozing, saunas and big talks. Russian men are portrayed as either swindlers or emasculated individuals. Women, as a rule, wear heavy makeup and provocative underwear, which they seem to enjoy to demonstrate.

The casting for the show was conducted in Brighton Beach. The show triggered a scandal before it was released to TV screens. Russian residents of Brighton Beach were highly annoyed with the "masterpiece".

Activists of the Russian diaspora in America wrote a letter of protest to the US administration. They posted the letter on the Internet. The letter was signed by prominent politicians and public figures. "Our values and aspirations lie with Irving Berlin, Joseph Brodsky and Sergey Brin - not 'Snooki' and 'The Situation,' " the letter said.

The authors of the message demanded the show producers either change the concept of the show or not air it at all. According to them, "Russian Dolls" confirm the trend that still exists in America. The discrimination of Russians in the States is still a serious issue.

The trend has not changed much in the US. Vyacheslav Igrunov, the director of the International Institute of Humanitarian and Political Research, told Pravda.Ru that the "Russian Dolls" was obviously a deceitful and obscene show.

"I come from Odessa and I have many friends living in Brighton beach. They are artists, engineers, newspaper editors, IT specialists. There are drug addicts and prostitutes in the Russian community in America, of course. But if you watch Russian TV, you can say that we have only junkies, gangsters and prostitutes living here. The Russians know very well that life in Russia is not all about crimes. However, many Americans judge Russia and the Russians by what they see on TV or on the Internet. This is the way the Americans perceive the life in Brighton Beach, that's why they make such low class smutty shows. I know what it's like to live in Brighton. I don't like it much. It's provincial lifestyle, but it's normal life. The show tells people that the Russians do not want and can not work. This is not true.

"The people, who come to live in America, do not feel as good as the Americans do, of course. Those people are hard-working, they have to work hard to live. Immigrants get lower salaries than the Americans, but America likes and values hard-working and modest immigrants. A polite American will never pay attention to the accent of a person. A polite American will never ask where this person comes from and why he or she came to America. From this point of view, the creators of "Russian Dolls" have broken elementary rules of decorum," the specialist said.

John Lisyanskiy, an activist with one of Russian organizations in America, said that when he googled the name of the series, he saw many links to adult websites in search results. Russian dolls, just like Natasha, are synonyms to 'prostitute.' This is another stereotype of the American society - most Russian women are taken as prostitutes.

Maria Ivanova, a descendant of Russian immigrants, believes that "Russian Dolls" promote this humiliating stereotype in America. "One time at school I had a man who looked at me and said, 'Oh you are Russian, you are blonde. That's nice - let's go on a date together. You are Russian, right? All of you are prostitutes.' It's a terrible situation. Maybe sometimes we Russians create this image," she told New York Post.