When Engineer Thomas Crapper marketed the Improved Ornamental Registered Flush-down Water Closet, commonly known as "The Crapper" he took his place in the hall of fame of sanitary engineering. However, he did not, in fact, invent the flush toilet - he invented the ballcock and produced quality Crappers for sale. 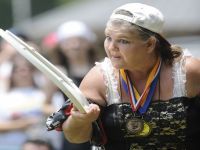 Lady talks to toilet seat before throwing it at Redneck Games, USA

Many were the people over time who visited a house with an indoor toilet and were horrified at the lack of hygiene, reporting "Well, how disgusting. Mine is in an outhouse at the end of the garden". Nowadays the flush toilet is a rudimentary past of sanitary equipment gracing bathrooms across the seven continents.

Now a new initiative is about to revolutionise sanitation systems, as much as Thomas Crapper did back in the late 19th century. The Bill and Melinda Gates Foundation has offered a multimillion dollar grant, 42 million USD to be exact, to reinvent the toilet. The idea is to transform human waste into energy and fertiliser and to invent water-saving sanitary systems.

However, just the technology is not enough. The UN Special Rapporteur on the right to water and sanitation, Catarina de Albuquerque, states: "New technology alone is not enough to overcome the sanitation and water crisis we face. Investments in software solutions, like awareness rising among the people on the vital importance of sanitation, are crucial to make sure the hardware solutions are actually used," adding that, "I urge all countries which face challenges in ensuring access to sanitation for the whole population, to associate the creation of hardware solutions with awareness raising and education activities, on hygiene promotion, including hand washing, as well as on the crucial importance of safe sanitation as a means to decrease child mortality and improve health conditions."

One year ago, the UN General Assembly recognised sanitation as a basic human right. With 4,000 children dying every day because they do not have access to clean water, the extreme importance of this initiative is placed into context.

Engineers of the world, Unite!