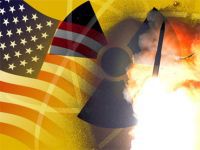 On Thursday, the Administrative Tribunal of the German city of Cologne began a trial with an unusual action. The pharmacist, Elke Koller, 68 years old, demanding the withdrawal of 20 American atomic bombs under guard at the Buchel military airfield, State of Rhineland-Palatinate.

The petition is supported by the German Section of the International Association of Lawyers Against Nuclear Arms. They indicate that the presence of such bombs in the country is against the provisions contained in international treaties to which their country is part.

The subject was analyzed by Sergei Guk, international observer of the radio station, Voice of Russia, who invited the eminent Russian diplomat, Valentin Falin, to the studio, a renowned expert on the issue of disarmament.

Besides Germany, there are nuclear arsenals in the Netherlands, Belgium, Italy and Turkey. They are mainly aerial nuclear bombs for a total of nearly two hundred. A weapon very antiquated with limited possibilities of use.

There are even among senior Pentagon military those who recognize that such bombs remaining stationed in Europe is meaningless, because the United States and its allies could defend themselves with weapons stationed outside Europe.

However, they are in no hurry to bring the bombs back home. And they always get an argument in favor of its continuation on European soil with new NATO members, especially the post-Soviet states of the Baltics. They argue that these bombs are an important guarantee of "independence" in relation to the Russians.

Radio Voice of Russia quotes a letter written by an international group of supporters of disarmament working at the Institute for Global Security. It says that "most of the inhabitants of Europe sincerely desire that the tactical nuclear missiles are withdrawn from the continent and destroyed."

"The Pentagon, quite naturally, pretends that this concern is taken seriously by them. And they ask Congress to release more than 200 billion dollars ... especially for modernization of warheads and bombs to be reused."

"How is it possible to explain the nobility of such expenses, and on top of it, at a time of U.S. financial anemia?" questions Gukh.

"The USA for now has not abandoned its basic concept which says that NATO is a part of its global strategy. They will consider the region of Europe as a main region which they should count on in the case of a global war, with all types of weaponry, including nuclear weapons," states the political scientist Valentin Falin.

"The question alone can be put in this way: whether or not they will maintain reserves of nuclear armaments on the territory of Germany or will they partially transfer these weapons to Bugária or Romênia. Summarizing, this is a strategic planning operation," concludes Falin.

The Pentagon plans have emerged as a bone of contention within the coalition government of Germany. The Foreign Minister, Guido Westerwelle, spoke publicly for the withdrawal of U.S. nuclear arsenals from German soil.

But his colleague, Thomas de Maiziere, with his responsibilities as the Minister of defense, prefers the strategy of nuclear deterrence. Prime Minister Angela Merkel holds a diplomatic silence.

However, everything indicates that the first steps on the path towards a nuclear-free world, promised by the winner of the Nobel Peace Prize, Barack Obama, are postponed.