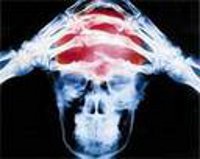 The study of German scientists provided evidence showing that the brain of urban and rural residents perceives stressful situations differently. Urban dwellers respond to them much more painfully than inhabitants of villages and small towns. Moreover, their neurophysiological response to stress is so intense that it can lead to destructive changes in the brain.

The city and the countryside are two different worlds. Instead the noise of leaves the city has crashing motorways, instead of grass and trees - jungle of concrete skyscrapers, and instead of a small circle of friends - thousands of indifferent strangers in the streets and subways. There is no doubt that the individuals who grew up in a quiet backwater are strikingly different from the urban dwellers. In asserting this, we mean habits, pace of life, and perhaps some psychological characteristics. However, recently German researchers have discovered that differences are far deeper. The brain of city dwellers functions differently than the brain of people living in rural areas.

The differences observed do not speak in favor of the city life. Scientists have found earlier that among those born and raised in the cities the risk of schizophrenia is doubled. Although the mechanisms of occurrence of this mental disorder are still poorly understood, in this case the numbers speak for themselves. This is not surprising, and the risk of anxiety disorders in city residents is 21 percent higher than that of rural residents. City dwellers suffer from mood swings nearly 40 percent more often than rural residents.

However, recent results astonished even seasoned scholars. Employees of the University of Heidelberg in Germany and McGill University in Canada, through the technique of functional magnetic resonance imaging (FMRI) have investigated the response to stress in people from different areas. FMRI technology allows recording the activity of one or another area of ​​the brain.

In this case, the goal of the scientists was to find out how the brain of the experiment participants reacts to a stressful situation. Fifty volunteers tackled arithmetic problems while being timed. The experimenters deliberately created a sensation of concern in the subjects in terms of their ability to cope with the task. In addition to changes in the brain activity, changes in the heart rate, blood pressure and the release of specific "stress" hormones also served as indicators of stress.

Firstly, under stress, urban dwellers displayed excessive activity of almond-shaped glands. Amygdala (located one in each hemisphere of the brain within the temporal lobe) is a part of the limbic system responsible for regulating the functions of internal organs, instinctive behavior, emotions, memory, cycles of sleep and wakefulness. Malfunction of the amygdala is presumed to be the primary cause of mental disorders such as autism, depression, post-traumatic shock and phobias. (Incidentally, patients whose amygdala is destroyed display complete absence of fear).

"This gland is sort of a danger sensor in the brain and therefore is associated with anxiety and depression," said Professor Andreas Meyer-Lindenberg with Heidelberg University.

Volunteers from major cities showed hyperactivity in another part of the brain as well - the so-called cingulate gyrus. This organ (also part of the limbic system), according to Meyer-Lindenberg, "is responsible for controlling emotions and avoidance of danger."

It turns out that the inhabitants of megacities who are already subject to daily stress react to it much more painfully than the inhabitants of villages and small towns. Moreover, if the findings of the scientists are correct, then the neurophysiological response to a stressful situation in city dwellers is so strong that it can lead to destructive changes in the brain and emotional disorders.

Surprised by such unambiguous results, the researchers conducted an additional series of experiments with other subjects, placing them in both stressful and non-stressful situations. However, the results were confirmed: the differences in the the activity of cingulate cortex and the amygdala emerged precisely in response to stress, and are dependent on the subject's place of residence. No other factors - age, marital status, education or income level - affected the identified indicators.

Another interesting fact: normally, amygdala and cingulate gyrus, being parts of one limbic system, have the neural connection. However, in those subjects who grew up in the city (even if they subsequently moved to the suburbs or countryside), "communication" between them is weakened. Apparently, the formation of connections between these parts of the brain occurs in childhood.

Professor Meyer-Lindenberg believes that the next task for the scientists is to identify specific factors of urban life that cause stress.

It is particularly important in the situation when the urbanization is gathering pace. According to forecasts of social scientists, by 2050 urban dwellers will account for 70 percent of the total population of the planet. Learning what characteristics of a big city cause stress and how we react to them, scientists could offer recommendation on the improvement of the urban design that would make life easier for the inhabitants of megacities of the future.