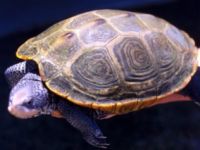 Runway 41 at John F. Kennedy International Airport was shut down for over an hour early on Wednesday because of turtles. Experts at the Port Authority of New York and New Jersey evacuated about 100 freshwater turtles around the runway from 10 p.m. local time (11 hours GMT), said John P. L. Kelly, a spokesman for the agency.

Some flights were delayed by up to 30 minutes, said Arlene Salac, spokeswoman for the Federal Aviation Administration, but not many: the runway is used infrequently at this time of year because of wind patterns common to the season (summer hemisphere North).

The runway becomes a crossroads of turtles each year at this time of year when they prepare to play.

"They seek sand banks to deposit their eggs," said Kelly, "and there is an ideal place across the runway 41. They leave the water and cross the road to lay eggs in the sand." According to the spokesman, the turtles were transferred to an ideal area as well.

The JFK airport is largely surrounded by water, where reptiles breed in and around Jamaica Bay. In 2009, the same runway was closed because of 78 Fluvia turtles.