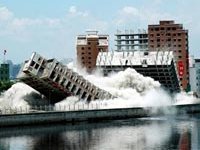 The talks about the doomsday have been ongoing for ages. It does not matter that it gets regularly postponed; it is the process of waiting for it is that matters. There is even a calendar which indicates the dates of the Apocalypse to the minute. Many of them are long gone into oblivion, some of them will take millenniums of waiting. Panic attitudes subside and then flare up with renewed force, reminding the course of illness of depressed patients. However, it is for the first time that this issue has moved beyond the scientific and philosophical communities to the public.

Recently in several Russian cities an ad campaign was run assuring that the doomsday arrives on May 21 of this year. In particular, posters with this content appeared in Moscow, Novosibirsk, Kirov, and Omsk. Some believed them.

Various factors, including the global crisis, make the ground for theories regarding the doomsday particularly fertile. In these troubled times all sorts of fortune-tellers and soothsayers come to light because it is very favorable time for disseminating scary stories. Besides, all these guessing to some extent distracts people from the pressing problems.

Numerous doomsday predictions imposed on us by Nostradamuses are largely based on speculation. The prophecies are not backed with concrete facts, but rather different hypotheses. American priest Harold Camping, according to whom the Judgment day happens on May 21 calculated the Armageddon according to the Bible. Meanwhile, the Bible says: "On that day and hour no one knows, not even the angels of heaven, but My Father only." In 1994 he predicted the second coming of Christ,   but, apparently, God had other plans.

Other prophets are haunted by "the Mayan calendar." They are digging into the chronology of the ancient people they find things that are not there. This is because they want to find at least something. When the long awaited apocalypse does not occur, they justify it by errors in the calculations, and are again trying to invent a perpetual motion machine.

Playing on human nature based on curiosity and fear of the unknown, pseudo-prophets make names on this. Supposedly wanting to warn mankind of impending doom, they nevertheless do not offer a way to avoid a catastrophe. Most likely, the messengers belong to the category of people who are willing to do anything for the sake of sensation. For example, a retiree from New York Robert Fitzpatrick spent his personal savings - 140 thousand dollars - for an advertising campaign warning of the imminent doomsday. This is nothing but the desire to become famous. However, if their predictions do come true, they would be getting a Nobel Prize in the realm of Hades.

And yet there are people who believe them. It largely depends on the particular personality: mentally stable people laugh and continue with their lives. Those with emotionally labile psyche become "victims" of the catastrophic predictions.

Meanwhile, psychologists know that it is unthinkable for our "unconscious" to imagine its own death. A protective mechanism in our psyche guards us from the perception of our own departure as a real possibility. Tell someone they will die tomorrow and they will laugh. On a second thought, we daily face if not the end of the world, then everything else - anything. Yet, we do not want to believe it.

Another thing is death as a global phenomenon. The doomsday is always associated with the intervention of evil forces from outside. They are asteroids trying to crash into our planet; they are volcanoes threatening to burn down everything living on earth, etc. The media, knowing perfectly well that the best-selling product is fear, utilize it successfully, making mountains out of molehills. Realizing that the basis of human nature is fear and curiosity, journalists skillfully manipulate public opinion. Pragmatic businessmen enjoy the factors creating fear and fulfill orders of apocalyptic-minded citizens, building them bunkers and premium shelters - a great way to make money on someone else's stupidity. Those who place the orders, after watching science fiction movie, where after the disaster and the death of civilization, only two people are left believe that these movies are about them.

However, the reality is not like a movie. If, hypothetically, a nuclear war happens, watching the lifeless planet from a bunker, even luxurious one, is not a very appealing prospect.
Elena Korochkina