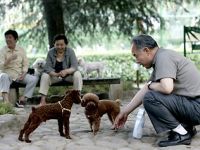 For decades, the strict policy of birth control has meant that residents of Shanghai, China, had to resign themselves to having only one child. Now the government is applying something similar for the dogs.

The reason given for the new ruling is the soaring pet population and rabies. Those who walk dogs are also required to use leashes. Beijing and the southern city of Guangzhou have similar regulations to control rabies.

Starting on May 15th, in the city, each person is entitled to have one dog only, and will still have to pay up to $77 (£124) per year to register it. The owners of the animals do not like the measure, which they accuse of being discriminatory and poorly drafted.

It is estimated that in Shanghai there are over 800,000 dogs, many of them unregistered. Authorities blame them for everything from diseases to the dirt in public places.

Pets were prohibited at the time of the leader, Mao Tse-Tung, who considered them to be a bourgeois habit. Some Chinese see the new law as an intrusion into their private lives.