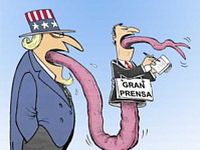 Every war is preceded by a lie using mass communication. One day Bush threatens Venezuela and Ecuador. Tomorrow, Iran? Then who else? (...) Let us remember just how many times the same United States and by the same means have manipulated us. Every major war was "justified" by what later (too late) is shown to be deliberate misinformation. A quick inventory:

1) Vietnam (1964-1975)
MEDIA LIE: On 2 and 3 August North Vietnam attacked two U.S. ships in the Bay of Tonkin.
WHAT WE LEARNED LATER: This attack did not happen. It was an invention of the White House.
Goal: Prevent Vietnam independence and maintain U.S. dominance in the region
Consequences: Millions of victims, genetic malformations (Agent Orange), massive social problems.

2) Grenada (1983)
MEDIA LIE: The small Caribbean island was accused erecting a Soviet military base and bringing danger to the lives of American Physicians.
WHAT WE LEARNED LATER: Absolutely not. President Reagan coined these pretexts.
Goal: Prevent the democratic and social reforms of Prime Minister Bishop (later assassinated)
Consequences: Brutal repression and restoring trust in Washington.

3) Panama (1989)
MEDIA LIE: The invasion was intended to arrest President Noriega for drug trafficking.
WHAT WE LEARNED LATER: A CIA agent, Noriega claimed sovereignty over the canal ending the agreement, which was intolerable to the United States.
Goal: Keep the U.S. control over this strategic line of communication.
Consequences: The U.S. bombing killed between 2 and 4 million civilians, ignored by the media.

4) Iraq (1991)
MEDIA LIE: The Iraqis would have destroyed part of the motherhood of Kuwait City.
WHAT WE'VE LEARNED LATER: Total invention of the advertising agency Hill and Knowlton, paid by the Emir of Kuwait.
Goal: Prevent the Middle East resistance to Israel and it behaving with independence from the United States.
Consequences: Countless victims of war, after a long embargo, including medicines.

5) Somalia (1993)
MEDIA LIE: Mr. Kouchner appears on the scene as a hero in a humanitarian intervention.
WHAT WE LEARNED LATER: Four U.S. companies had bought a quarter of the Somalia subsoil rich in oil.
Goal: To control a militarily strategic region.
Consequences: Unable to control the region, the United States will maintain it in total chaos.

6) Bosnia (1992-1995)
MEDIA LIE: The American firm Ruder Finn and Bernard Kouchner disclose the existence of Serbian death camps.
WHAT WE LEARNED LATER: Ruder Finn and Kouchner lied. Those camps were for prisoners. The Muslim president Izetbegovic admitted it.
Goal: To break a leftist Yugoslavia, to eliminate its social system, and submit the area under multinational control of the strategic routes of the Danube and the Balkans.
Consequences: Four years of horrendous war for all nationalities (Muslims, Serbs and Croats). Provoked by Berlin, prolonged by Washington.

7) Yugoslavia (1999)
MEDIA LIE: The Serbs committed genocide against the Albanians in Kosovo.
WHAT WE LEARNED LATER: Pure NATO invention as admitted by Jamie Shea, its official spokesman.
Goal: To impose the power of NATO in the Balkans and its transformation into the world's policeman. Install an American military base in Kosovo.
Consequences: Two thousand victims of NATO bombing. Ethnic cleansing of most non-Albanians from Kosovo by the KLA, protected by NATO.

8) Afghanistan (2001)
MEDIA LIE: Bush wanted to avenge the September 11 and capture Bin Laden
WHAT WE LEARNED LATER: There is no evidence of the existence of this network. Moreover, the Taliban had offered to extradite Bin Laden.
Goal: To militarily control the strategic center of Asia, to build a pipeline that would allow control of the energy supply in South Asia.
Consequences: Long term occupation and greatly increased production and trafficking of opium.

9) Iraq (2003)
MEDIA LIE: Saddam has dangerous weapons of mass destruction, Affirmed by Powell at the United Nations, showing evidence.
WHAT WE LEARNED LATER: The White House ordered the falsification of these reports (attention to subject Libby) or manufacture of them.
Goal: To control all the oil and blackmail rivals: Europe, Japan, China ...
Consequences: Iraq submerged in chaos and barbarism, and the women returned to submission and obscurantism.

10) Venezuela - Ecuador (2008?)
MEDIA LIE: Chavez supports terrorism, imports weapons, he would be a dictator (the ultimate excuse seems not to have been chosen yet.)
TRUE OBJECTIVE: The multinational wants to keep control of oil and other riches of Latin America, fearing the democratic and social liberation of the continent.
Consequences: Washington leads a global war on the continent: coups, economic sabotage, blackmail, establishment of military bases close to natural resources

11) Libya - it's up to the international community to stop the lies and the attacks. We've shown there's no "innocent civilians" being attacked, but heavily armed terrorists. There is no "popular" rebellion as the British media would portray the big lie. It's just the opposite, this "rebellion" is not popular. Water, oil, vast resources are the target, as well as re-establishing bases and control of the continent.