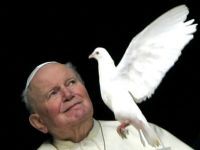 He was one of the most popular popes in history, helping to revitalize the Catholic Church and bringing together thousands of the faithful wherever he went. But John Paul II, who will be beatified on Sunday, May 1, is also the target of much criticism.

Karol Wojtyla, then archbishop of Krakow, was 58 when he became Pope John Paul II in 1978. The Polish pope was passionate about theater and a former metalworker. He injected great energy and enthusiasm to the post of leader of the Catholic Church.

While head of state, John Paul was a pope who loved being around the people. During the 26-year pontificate, one of the longest in history, he visited no fewer than 127 countries - always attracting crowds. Next Sunday, at least 300,000 people are expected to attend his beatification, the first step to becoming a saint.

John Paul II was the first Slavic pope of the Church. Though charismatic and having media appeal, he was adamant about Catholic doctrine on various social issues.

According to Bruno Bartoloni, a journalist specializing in the Vatican, the pope had the courage to meet with dictators, but for John Paul, what counted was the Church as an institution, which means making difficult decisions. He related to young people, according to the Vatican, they had a passion for the Polish pope, even though he has never made concessions to modernity in the field of sexuality for example.

John Paul has been criticized for remaining blind to the scandal of child abuse committed by Catholic clergy. A tough legacy for his successor, Benedict XVI, who had to deal with these problems. The two popes differ in style, but have the same doctrinal conservatism.

"John Paul II was able to look straight into the eyes of the people. Benedict XVI was a shy person who has had to adapt to the role of pope. Initially, when faith came to him, the current Pope was keen to push it away because he was afraid of being touched," explains the Vatican.

Benedict XVI has shown a willingness to align himself to changing times at various points. He relaxed the posture of the Vatican on contraception and hinted that condom use is acceptable in some cases.

The current pope will preside over the ceremony of beatification of John Paul II on Sunday. This is the first time a pope is declared blessed by the successor. The time elapsed is also a record - only six years after death. Even away from the earthly world, John Paul makes an impact.