Global Marijuana March 2011 to be held in Moscow? 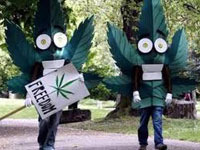 The Moscow administration has recently received an application for hosting the Global Marijuana March in the Russian capital on May 7. The participants of the unusual event will demand changes be introduced in Russia's public policy about drugs. The demonstrators particularly demand the legalization of medicinal marijuana, the change of the procedure for examination of car owners and the abolishment of the Federal Service for Control over the Turnover of Drugs.

President Medvedev has already said that the chances for the Marijuana March to be held in Moscow are close to zero.

Viktor Ivanov, the head of the Federal Service for Control over the Turnover of Drugs, said that a half of all codeine-containing medications available at drug stores are mostly purchased by drug addicts. There is a restriction for selling such medications - not more than two packs per customer - but the restriction does not work, the official said.

To all appearance, the participants of the Global Marijuana March believe that the object of their worship and addiction - cannabis or marijuana - can hardly be considered as a drug. According to them, tobacco and alcohol are much more dangerous.

Indeed, marijuana kills a lot less people than alcohol and cigarettes do. Marijuana has already been legalized in a number of countries of the world, including a European state - Belgium. In the USA, marijuana became extremely popular during the 1930s, during the peak of the dry law. The American society received several serious problems in one package: mafia, poor quality alcohol beverages, home-made alcohol and drugs. US authorities tried to decriminalize the personal use of marijuana during the 1970s, but President Nixon vetoed the initiative. However, eleven states legalized marijuana. In California, marijuana was legalized at the end of the 20th century for medical use, for HIV-positive patients, for example.

The status of cannabis as the most important agricultural crop of the USSR was confirmed with the placement of cannabis leaves together with wheat and sunflowers in the center of the sheaf inside the nation's main fountain. Cannabis can be seen in the structure of sculptures of the renowned "Friendship of Nations" fountain. The fountain was erected at the USSR's major agricultural exhibition in 1954. During the Soviet times, they used to grow cannabis freely on unprotected fields for years (during the 1960s).

One should bear in mind the fact that smoking marijuana causes severe damage to human health indeed. The followers of this kind of smoking may often suffer from headaches, nausea, chronic fatigue, as well as other ailments affecting the reproductive function of both men and women. To crown it all, marijuana smokers may want to try something different, something stronger.