The progressive movement against the reactionary forces in the U.S. 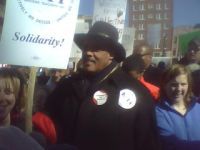 The major media of Spain has paid great attention in its description of what has been happening in the U.S., with the movement known as Tea Party, a right-wing movement that has been misrepresented in most of the media as an antiestablishment movement.

In another article, I tried to demystify this movement. It is a movement that is clearly manipulated by economic and financial groups affected by the reforms carried out by Obama ("The Tea Party: Fascism Is it possible in America?" El Plural 25/10 / 10). One of such groups include health insurance companies whose interests have been affected by health care reform financing in the U.S.

The social base of the Tea Party movement is primarily employees of insurance companies and other businesses affected by the Obama administration reform as well as independent professionals and small business sectors, mainly opposed to the ability of the government (federal or state) to collect taxes, large financial groups and businesses and those with higher incomes who consider these reforms the root of all evil in the economy and want to minimize them.

The extent to which the supposed anti-establishment Tea Party has pushed more candidates to the U.S. Congress has been precisely to maintain the huge cuts in taxes for the "super rich" that President Bush junior approved and that President Obama had promised to eliminate during his election campaign, but finally relented, agreeing to allow them to continue.

One of the biggest financial supporters of Tea Party is the billionaire David Koch, who spent vast sums of money never seen before in U.S. electoral history in supporting Republican Tea Party candidates. One such was Scott Walker, for governor of the state of Wisconsin, a state previously known for its progressive tradition.

It was the plan of David Koch and his agent Scott Walker to try to dismantle the welfare system in that state, as if getting it done in that state, they could also get it done in other U.S. states. And a key element in this strategy was to weaken unions (beginning with public sector unions), to the point of virtually prohibiting the practice of collective bargaining, limiting these agreements to negotiate wage levels, but nothing else.

The argument used to carry out this project was the need to reduce state budget deficit, which required some changes and cuts that required the weakening, or near extinction, of the trade unions. To mobilise support for these anti-union measures, Scott Walker used the shock troops of the Tea Party, led by Joe "the plumber" for the state of Wisconsin, a campaign being financed by David Koch.

But to Governor Walker's surprise, the Tea Party and the Republican party (as well as the establishment in general) unions and working people in Wisconsin were mobilised in the largest demonstrations ever seen in history of Wisconsin, much larger than the Tea Party. In fact, the latter was overwhelmed by a huge crowd of workers, peasants and middle class professionals, including workers, employees and public sector professionals who mobilised to defend public services of the state welfare.

The big surprise is that most were young people, including children with their parents who were at the demonstrations to support their teachers. In the meetings that took place in the Wisconsin State Capitol, the songs (that were thought forgotten) of workers' struggles that had defined the membership of the progressive labor movement in Wisconsin were heard again. Soon, the manifestations in Wisconsin were extended to other states governed by the Tea Party and the Republican Party.

Such demonstrations have created a huge sympathy throughout the country to support the right to unionisation and collective bargaining agreements. Surveys show that those who support this law are twice as many who oppose it. And in Wisconsin Governor Walker suffered a high rejection, even among those voters who had voted for him.

Polls show that if elections were held, Walker would lose: he would get 45% of the electorate compared with 52% for his opponent, the Democratic nominee. But what is even more important is that this resurgent labor movement is also challenging the neoliberal dogma that has dominated the country's conventional wisdom. This dogma states that the only possible answer to overcome the crisis is to reduce the federal deficit by reducing state-based social spending and social and labor rights.

One of the most viewed banners at the Wisconsin demonstrations was one that read "We are not the problem: banks, Wall Street and large corporations are the problem." The secretary general of one of the most militant unions in the U.S., the nurses' union, pointed out correctly that "the major cause of growth of the deficit were the tax cuts and benefits granted to banks and large corporations." In Wisconsin, more than two-thirds of large companies pay no taxes having reduced the tax burden on corporations by 50% since 1981, with Governor Walker reducing it even more.

A final observation. One of the most emotional moments of the huge demonstration that took place in the main square of Madison, Wisconsin was when the Reverend Jesse Jackson, before his speech, read the telegram of solidarity from the clandestine civil servant trade union for Egyptian employees. The square erupted in enthusiastic applause, with a song of solidarity (Solidarity Forever, the anthem of U.S. unions).

The major television networks CNN, ABC, CBS, NBC barely covered these events. But for the first time in the history of the last forty years, left television channels such as The Ed Show (clearly favoring unions) or Rachel Maddow (liberal feminist) both programs on MSNBC, as well as Democracy Now, are reaching significant audiences, presenting alternatives to traditional channels like the right-wing conservative and reactionary Fox.