Mystical coincidences and theory of synchronicity 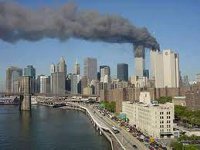 "We forgot to warn Libya!" "About what?" "That It will be bombed! They need to evacuate the population!" "Where to?" "To Bolivia! It won't be bombed." Thanks to the Russian guys Slava and Lyosha, Libya was warned, although it has not saved it from the bombing. The theatrical premiere of "The Election Day" play took place in 2003. The bombing of Libya under the code-name "Odyssey. Dawn" occurred in March of 2011.

Perhaps even more prominent were mystical coincidences related to September 11 of 2001, when two planes hit two skyscrapers of the World Trade Center in New York. In 1997 a manual of the Federal Agency for Emergency Management (FEMA) "Emergency response to terrorism" was published, whose cover depicted the North Tower of the World Trade Center in the optical sight. When the attack occurred, the first plane crashed into that tower, at the same place that was marked on the cover of the manual.

The cover of the disc of a California duo The Coup depicting black smoke around both Trade Center towers was issued two months before the attack. Incidentally, depending on the context, the English word "coup" can mean coup d'etat or successful maneuver, and even simply luck. One of the band members, a black rapper Raymond "Boots" Riley, openly positions himself as a communist.

On September 3, 2001, that is, a week before the attack, the cover of the Russian magazine "Construction and Repair" depicted an advertisement showing the twin towers crossed with a red line, like a prohibiting road sign.

The events that occurred immediately during the American tragedy seem inexplicable. On September 11, 2001 at 21:54 (GMT) British television reporter for BBC Live reported that the building number seven has collapsed (the building was not hit by a plane). His words were accompanied by subtitles. In reality, building number seven collapsed 26 minutes after the reported news. Head of the news service BBC World Richard Porter explained the incident by a "coincidence" and "pure accident".

Mystical coincidences occur not only in politics but also in everyday life.

American actor Charles Cogley who died in 1899, was buried not in his homeland, but in Galveston (Texas), where his troupe was touring. A year later a hurricane of unprecedented strength struck the city, washing away a few streets and a cemetery. Hermetically sealed coffin of Cogley has sailed the Atlantic for nine years and six thousand miles, until it was finally brought to the shore in front of the house on Prince Edward Island in the Gulf of St. Lawrence where the actor was born.

When a resident of Detroit Joseph Figlok was walking down the street, a one year old baby fell on his head from a window of an apartment building. Both the baby and the man had nothing but a slight shock. Exactly one year later, Joseph was walking down the same street again, and suddenly the same child fell on his head. Neither were injured again.

A few days before the Allies' landing in Normandy in 1944, a crossword was published in the conservative London Daily Telegraph newspaper. The responses to it were encrypted codes of the forthcoming military operation, including the coded name of the very secret landing operation Overlord. Soon employees of MI 5 found that the innocent crossword was compiled by a schoolteacher.

There were also coincidences demonstrating demonic literary talent and providence.

In 1838 a mysterious novel by Edgar Allan Poe "Narrative of Arthur Gordon Pym" was published. In one scene, the author describes desperate starving people making a drawing to decide who will be eaten. As a result, the trio devoured their fourth companion named Richard Parker. On July 25, 1884 vessel called Mignonette shipwrecked.

Four of the survivors, just like the aforementioned literary characters from half a century before the actual events, turned out to be in the same boat. After 19 days of wandering in the open sea, a 17-year-old cabin boy lost sanity from hunger and drinking the sea water. The captain decided that fate has chosen its victim. The guy's name was Richard Parker. None of the sailors read the novel by Edgar Allan Poe.

In 1898 the little-known writer Morgan Robertson wrote a novel Futility, The Wreck of the Titan. The novel told a story of a voyage of a transatlantic liner Titan that sank during its first voyage in the month of April. The "Titan" described in the novel was touted unsinkable and had the following characteristics: length of 800 feet (243 meters), displacement of 75,000 tons, motor power of 50 000-horsepower, speed of 25 knots per hour, four tubes, and three screws. On a cold April night the ship encountered an iceberg and sank. 14 years later, "Titanic" with the length of 882.5 feet (269 meters), displacement of 66,000 tons and a capacity of 55 thousand horsepower, moving at a speed of 23 knots per hour, with four tubes and three screws, set off to a trip across the Atlantic. According to the book, there were three thousand passengers and 24 lifeboats on "Titan," while Titanic had 2207 passengers and 20 lifeboats.

Outstanding minds have tried to explain mystical coincidences. The German philosopher Arthur Schopenhauer denied coincidences and thought that they were a consequence of the global harmony that leads to crossing of human destinies.

Two Swiss citizens - one of the founders of modern physics, the Nobel laureate Wolfgang Pauli, and the psychologist Carl Gustav Jung - also made a contribution to the study of this issue. Before the two began working in a tandem, each of them has proved his value working independently. Pauli formulated the key principle of quantum physics stating that the two particles cannot be in the same condition. Jung became known as the author of the theory of the collective unconscious and archetypes. Together Pauli and Jung published a paper "Synchronicity, or the principle of causal connection."

Pauli- Jung theory interpreted the coincidence as the manifestation of an unknown universal principle that binds together all the physical laws. Mystical coincidence may be a reflection of common physical laws in the destiny of every individual.