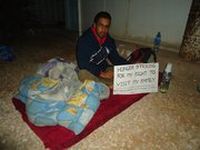 Morocco has violated the human rights and dignity of the Saharawi people of Western Sahara for over three decades, since the illegal annexation of the territory in 1975. The record of the Moroccan authorities has been largely ignored by an international community more focused on oil. Today the life of another activist hangs in the balance.

Morocco has systematically violated the human rights and dignity of the Saharawi people of Western Sahara for over three decades, since the illegal annexation of the territory in 1975. The shocking and abysmal record of the Moroccan authorities has been largely ignored by an international community more focused on oil. Today the life of another activist hangs in the balance.

"As established by the General Assembly in 1979, Morocco is illegally occupying the territory, in the same way as Israel is, in the occupied Palestinian territories. Thus, Morocco systematically violated, inter alia, the Fourth Geneva Convention, which establishes the obligations of the occupying power, most notably the prohibition of transferring part of its own population into occupied territory (Article 49). At present, it is estimated that in the territory there are four Moroccan settlers for each Saharawi".*

Moreover, the exploitation of the resources of the Saharawi people without the consent of its representatives, by the European Union, constitutes a violation of the law. Yet what does the international community say to Morocco? What does the international community say about Western Sahara and its illegal occupation? Nothing. Where is Spain's declaration that its foreign policy will honour basic human rights? Nowhere.

Today Pravda.Ru received information from Saharathawra about the desperate plight of hunger striker Hallab Mohammed, 22 days on hunger strike and unable to receive visitors as per the UNHCR Plan.

"Hallab Mohammed is on hunger strike since last March 7, at the headquarters of UNHCR in the Sahrawi refugee camp, where he has no medical care and his condition worsens every day. Last night he had to be hospitalized because he ran risk of falling into a coma. The decision to take this action was given after the arbitrary decision to exclude the program of UNHCR family visits".

The Family Visitation Program that has been developed by the United Nations High Commissioner for Refugees (UNHCR) from 2004, offers the possibility for Saharawi families
to visit their relatives on the other side of the wall. Mohamed Hallab was one of the people who had been granted this right. But hours before the flight,  the Moroccan authorities decided to deny him the right to visitors from his family.

"Refugee status requires UNHCR to ensure their physical safety and compliance with the law in exercising its rights, which will make the United Nations High Commissioner for
Refugees ultimately responsible for the consequences of hunger strike". (SaharaThawra)