Obama did not read Roosevelt

"The only thing to fear is fear itself," taught the president of the New Deal 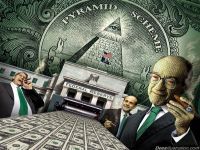 Elected in the hope for change, Barack Obama governs under the sign of fear and failure. Immobilized before conservative fury, the President bent his knees and accepted to ignore the inaugural speech of Franklin D. Roosevelt in 1933, in which he urged the American people, then tormented by an unemployment rate of 23%, "the only thing to fear is fear itself."

Obama's fears caused him to propose solutions to the broken leg issues that plague most of American society. Among the many problems at the forefront include the regulation of financial markets, the treatment of 11 million homeowners drowning in mortgage debt exceeding the value of the property financed, the violent methods used by lenders to repossess their homes and, finally, the hot potato of fiscal deficit and the public debt of the federal government, and the states and municipalities.

In an interview with the British newspaper The Independent, actor Matt Damon fired against the president: "I think he's completely subjected to Wall Street. The economy has enormous problems. We still have banks that are too big to fail. They are even bigger and making more money than ever. Unemployment at 10%? It's terrible."

Damon, an Oscar-winner in 2011 and liberal activist, committed his prestige in Hollywood to Obama's presidential campaign. There were many persons who have entered with body and soul in the movement that lifted the Illinois senator to the presidency of the United States of America. They are nearly as disappointed as the unemployed borrowers, driven from their homes, and forced to sleep, eat and survive in cars, that escaped the fury of recovering bankers.

It is naive to imagine that the omissions, failures and setbacks of Obama are just the product of a fragile personality. The explanation is too easy to be true. The vacillations of the President express, in fact, the weakening of the social foundations of the Democratic Party.

De-industrialisation promoted by the "relocation" of big business not only caused the mass destruction of jobs in factories, but reduced job opportunities in services related to industrial dynamism. It also increased the number of employees in precarious low-paid services. The fall in income 90% below the scale of income distribution in the last 30 years - including the decline of the American middle class - is not news to anyone. The disorientation of the Democratic Party is not a recent phenomenon.

We must remember the role of Bill Clinton and his collaborators, and Lawrence Summers and Timothy Geithner, in the "battle" for financial deregulation that culminated in 1999 with the enactment of the Gramm-Leach-Bliley law. The law opened the gates to the exploits of known crooks and the financial market, legitimised by pseudo esoteric models of risk pricing, under the protective mantle of agencies to evaluate the quality of assets.

The loss of programmatic substance of the Democratic Party has led to increased aggressiveness of conservatives who, among other shenanigans, felt encouraged to increase the decibels of their outcry against deficits and debt. Deficits and debt that was generated largely by the government bailout of the financiers who financially support the election campaigns of many congressmen.

While they cry out against government spending, the Republicans with the majority of seats, shoved down the throat of the President to maintain the present tax cuts for the rich, extending the gift granted by George W. Bush to the well-off. But, in a society bewitched by the myths of "utopia" and "of the land of opportunity," and the indecent shameless practice of favouring the rich and the big corporations and banks, all explodes in the face of the brazen.

The movements in reaction to unfair treatment and suppression of rights, which began with demonstrations against public officials in Wisconsin, are spreading to other states. They are then joined by the protests of American citizens who were thrown out of their homes by the brutality of creditors, supported a bankruptcy law that favours them. Many groups are willing to defend the injured, which caused a proclamation that requires more equitable conditions in the negotiations between creditors and debtors.

Filmmaker Michael Moore harangued on March 5 the Wisconsin rebels: "The United States is not broken. -The country is awash with money. The problem is that the money is not in your pockets. It was transferred in the biggest heist in history, from the pockets of workers and consumers to banks and for the portfolios of the super-rich. Today, only 400 Americans have more wealth than the sum of what is owned by half the population." Strike!