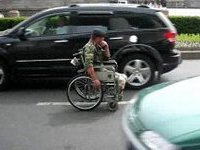 Beggary is not a problem for impoverished and developing states only. Street beggars can be found in practically every country of the world. In Europe, however, most beggars are gypsies and immigrants from other countries. Last year, France and Finland began to deport gypsies from their territories, but it was not beggary that laid the basis for such an intolerant decision. There are more serious problems about the situation, although street begging also played its role, of course. The Finns, for example, even decided to ban street begging legally.

Nowadays, beggary appears on the Internet in the form of online panhandling. Men and women collect money on the Internet saying that they have cancer or other deadly diseases.

The problem of beggary in Russia is just as serious as it is in other countries. In ancient times, beggars were respected in Russia. The Church Charter of 996 categorized poor and crippled people as people of the church. They were referred to as Christ's brothers and pilgrims for peace.

In the 17th century, Russia had a special program for the poor. The state provided financial support for elderly people and those who could not make their living for objective reasons.

During the era of Peter the Great the laws became tougher. Giving alms was penalized, physically disabled individuals had to live in special shelters. Those who simply did not want to work and preferred to beg for money in the street, would be persecuted criminally.

In modern Russia, beggars of all stripes flooded the streets of many cities after the authorities canceled the penalty for welfarism. Panhandling is a serious business which is run by serious people.

In Moscow, the most profitable place for beggars is the metro. Each beggar has their special place there, and this place belongs only to them, it can not be taken by any other beggar. A part of the money, which metro beggars collect, goes to their patrons. A metro beggar can make 40,000 rubles a month ($1,300), which is a lot higher than the average salary in Russian provinces. Metro beggars do not break any laws. It is only forbidden to hassle passengers, but it is legally allowed to proffer a begging bow. Those who come to Moscow from other regions (they are the majority) receive support from their patrons, who help them with their registrations.

Russian people have mixed feelings about beggars. Everyone knows that beggary is business, that beggars act like employees, who receive a percentage from their earnings. However, many Russians sincerely help an old lady standing by the church or a child, who sings songs in a commuter train.

A recent opinion poll showed that nearly 64 percent of Russians believe that the state must provide assistance to panhandlers, whereas a third of the polled said that beggars must be persecuted and punished.

One of them, Leonid Konovalov, a 64-year-old homeless resident of the city of Kemerovo, made a philosophical documentary about the life of the society and sent his piece of art to Cannes. The film titled "I + People =?" lasts for more than two hours.

"The dump is the best of my jobs. There are no bosses here, and you live here as you want. Many won't understand this. When you hit the lowest and become one of the despised, this is the time when understanding comes," the man added.