If the U.S. put an end to drug use 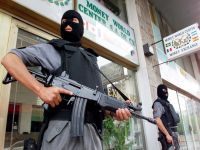 The exacerbated increase of violence in countries like Guatemala, El Salvador, Honduras, Jamaica and Venezuela, has to do with changes in the circulation routes of drug trafficking. The violence rate in the first two countries is greater than that recorded when faced with situations of civil war.

Organized crime, according to The Economist, is primarily responsible for this staggering increase in crime. Central America is a bridge between Colombia and Mexico, the two fundamental axes of drug trafficking on the continent, leading into the biggest market for drugs in the world - the U.S.A. This is the fundamental reason for the true inducer of drug trafficking, with all the tragedies that it implies.

As the pressure increased, first in Colombia and then in Mexico, Central America was erected as an alternative trafficking route. Mexican cartels are hiring Central American gangs to link themselves directly with the general circulation. Ex-soldiers are recruited who have been released from the army. Only in Guatemala the number of their armed forces fell by 2/3, whose quotas were largely recruited by the mafia. The Economist estimated that there are around 70,000 members of Mara - a violent version of Central American gangs. The tendency of Mexican cartels in drugs to pay for services rendered multiplies the corresponding consumption and related crime.

The Central American region is the poorest on the continent with a per capita GDP of $2,700, less than a third of Mexico. The amount of drugs and weapons seized in Guatemala in the first six months of 2010 amount to 5% of the national GDP - to get an idea of the weight and pull the resources from the trade in these countries represent. But Mexico receives 84% of the total allocation of resources to combat drug trafficking, according to the Measured Initiative Program of the U.S.

As the Americans imagined a country without the Mexicans - in an attitude of even bigger incitement to discrimination - we imagine the world without the use of drugs by the U.S.A. A country like Mexico and throughout Central America, would be affected very positively by the weakening of the drug cartels and gangs that proliferate from them.

But the U.S.A., the giant worldwide inducer of the production and trafficking of drugs, as always, diverts from the roots of the problem to other countries, seeking the extradition of traffickers and eradication by means of chemical poisons in large areas where the coca leaf is produced for the consumption of its population, the false solution for the problem.

If the U.S. was systematically attacking the entry of drugs into their territory, if they would prevent the deployment of sophisticated weaponry to Mexican cartels, if they were striking the millionaire deep network that earns huge profits from trafficking, and arresting traffickers and disconnecting their networks - the world would live better. But the society that consumes the most drugs in the world, becoming its largest consumer market, is a society largely dependent on drugs to survive, leading the lifestyle that it takes and trying to spread the disease to other countries.