Muscovites live like gods and get best things in Russia? 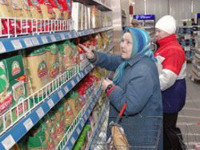 All of Russia outside the immediate suburbs of Moscow believes the myth of a separate state within Russia, called Moscow. Many believe that Moscow has better housing, better shops, and generally better living conditions. But is this really the case? Who are Muscovites and do they really live lavishly at the expense of others?

During a trip to Voronezh region I had a chance to socialize with the locals who tried to persuade me that the best products from their district are sent to Moscow stores, while they have to be content with what is left and even drink powder milk. I did taste the milk and, unlike in Moscow, it was natural. The locals did not believe my statement that in Moscow you can find milk with a shelf life of six months, and, apparently thinking that I spy for the capital, returned to their homes.

Statistics show that Muscovites are not liked in the province because they are believed to be entitled. First, to comfort the residents of the periphery it should be stated that Moscow and its region are capable of feeding 12 million of its people with products manufactured in Moscow region and imported from abroad.

Second, it would be nice to open people's eyes to the far from sweet life of over 70% of Muscovites who do not live like gods, but ordinary people who sometimes even have to borrow money to make the ends meet. According to official government data, the average salary in Moscow in 2011 will amount to 43 thousand rubles ($1435). The minimum wage is 10.4 thousand rubles ($346). Of course, $1,400 for the residents of the province is a fantastic sum of money which can be sufficient for a carefree life for two or even three months provided they have their own farms. Yet, many people forget about the magic ratio of salaries and costs in different cities of Russia. Let's try to figure out whether the average Muscovite without special needs will be able to live on this money in Moscow for a month.

It is also worth considering that a working person has a habit of snacking at lunchtime, so add to that the average cost of lunch in a cafeteria - $5 per day, amounting to $100 per month.

If you are not lucky and your job is not in a neighboring yard, you should pay for your commute. A single pass for 4 types of transportation with no more than 70 subway trips will cost you $80.

The amount that a Muscovite has to spend each month is over $670. It is worth noting that the aforementioned person does not drink or smoke, does not suffer from not having a mobile phone and the Internet, does not buy clothes and gifts, uses only urban public transport and does not to leave the capital (because prices for the trips outside Moscow vary greatly). The said Muscovite eats only at home and has a rather monotonous diet. Summing up all these costs it will be obvious that the amount will greatly exceed the one provided in the beginning of the discussion.

Even though it sounds improbable, but there are people in Moscow who work for peanuts. For example a researcher in the Moscow art museum makes approximately $400 a month, while a college teacher of botany makes approximately $300. This means that without exaggeration, the average salary in Moscow is $800-1,000. This is not a lot of money by Moscow standards, especially considering the fact that life in Moscow is very exciting and temptations are ample.

In general, the capital is not as charming and attractive as it seems at first glance, while its industry can unfortunately easily absorb any amount of money, no matter how much you earn.