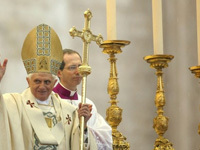 When Our Blessed Mother appeared to Sister Agnes Katsuko Sasagawa in Akita, Japan in 1973 she warned that "The work of the devil will infiltrate the Church in such a way that one will see cardinals opposing cardinals, bishops against other bishops. The priests who venerate me will be scorned and opposed by their confreres (other priests). Churches and altars will be sacked. The Church will be full of those who accept compromises and the demon will press many priests and consecrated souls to leave the service of the Lord."

The word "diabolic" comes from the Greek "dia-boline" which means to tear apart, rend asunder. Anything, therefore, that breaks pattern, that destroys unity, that corrupts gestalt, that produces discord. That is the diabolic. Biblically speaking, the essence of the satanic or the diabolic is the hatred and contempt of the cross of Christ. We have it - the spirit of it - in the Catholic Church. Notice, for example, how much we have given up mortification, self-denial, discipline in schools, discipline in seminaries. The decline of the spirit of discipline is a hatred of the cross and, therefore, of Christ himself.

Pope Benedict XVI, in his 2010 homily for the Solemnity of Saints Peter and Paul, confirmed that the greatest damage threatening the church today is the pollution from within that is "eroding the integrity of the Mystical Body, weakening its ability to prophesy and witness, tarnishing the beauty of its face."

Today we find numerous examples of this bickering and infighting among top members of our hierarchy. For instance, only recently public accusations of a sex abuse cover up were leveled by Cardinal Christoph Schoenborn of Vienna against Italian Cardinal Angelo Sodano, who served for 16 years from 1990 to 2006 as secretary of state, the Vatican's second-most important position. According to protocol accusations made against a Cardinal are the sole competence (of judgement) of the pope.

There are also many open displays of opposition to church teachings by both priests and laity on issues such as the Holy Mass, women's ordination, papal infallibility, contraception, homosexuality, abortion and obligatory celibacy. In April 2009 Georgetown University, in a disgusting public display of shame at the name of Jesus, covered over the monogram "IHS" to please U.S. President Barack Obama who no longer believes America is a Christian nation. In Phoenix, Arizona, Bishop Thomas Olmsted had to excommunicated Sister Margaret McBride, a nun and ethics committee adviser, for trying to justify a direct abortion in the first trimester.

We also see a variety of disturbing contradictions in the ways in which the faith is being practiced. For example, while the archdiocese of Denver had permitted a Colorado Catholic school to deny enrollment to a gay couple's child, the Archdiocese of Boston, in a similar case, countered the decision of a local Catholic elementary school that denied admission to an 8-year-old child of a lesbian couple.

Also, while roughly one third of U.S. bishops strongly opposed President Barack Obama''s appearance at Notre Dame in 2009, about 2/3 of the bishops tacitly approved the visit giving the pro-abortion president a national platform to advance moral relativism. We see contradictions even in clerical dress - many priests and nuns refusing to wear their collars and habits as a visible sign of Christ in the world.

Indeed, our National Bishops Conferences' have been unable to speak with a single unified voice on the simplest of issues such as that regarding the question of whether pro-abortion politicians should be allowed to receive Holy Communion. On this elementary and straightforward matter each U.S. bishop has been given the green light to set his own policy in his own diocese. This of course is a claim to "territorial morality" - in essence the same slogan and formula used by politicians who claim the right to lead a double life - a private life in which they supposedly oppose the evil of abortion and a public life in which they allow and even promote this evil in others. What form of mental 'compartmentalization' or bicameral thinking can allow intelligent thinking humans to rationalize this way when Scripture has it that "no man can serve two masters" (Matt. 6: 24)?

We also see a rise in fraudulent or nominally "Catholic" newspapers run by the laity and clergy alike such as Commonweal, America Magazine, The National Catholic Reporter, Catholic New Times, Prairie Messenger, and Conscience Magazine. Under the pretense of serving Vatican II they seek to maim the true Spirit of the Council. Even the Vatican newspaper L''Osservatore Romano (LOR) has, in recent times, veered from its main course in defending orthodoxy. Since Giovanni Maria Vian became its editor-in-chief the paper has become somewhat of an international scandal attempting to become relevant to an international pop culture that is increasingly decadent. In 2009, for example, LOR published an article by Archbishop Rino Fisichella entitled "On the Side of the Brazilian Girl" which falsely claimed that direct abortion could be morally justified and its evil mitigated in some "extreme circumstances".

Coming to the fore also today are several fraudulent "Catholic"groups seeking to overthrow in anarchistic fashion the church hierarchy in favor of a people's democracy. Some of these are Catholics for a Free Choice, We Are Church, Voice of the Faithful, Catholic Network for Women's Equality, Catholic Women's Ordination. These groups tactfully use the mass media to deliberately misrepresent Catholic teaching in the public square. Added to these groups are various and spurious charities and health organizations such as Development and Peace and the U.S. Catholic Health Association which are known to support several pro-abortion and pro-homosexual groups. Under the tutelage of Sister Carol Keehan, the U.S. Catholic Health Association became hugely instrumental in helping to bring into law President Obama's anti-life health care reform.

These are not isolated cases of internal division threatening the church. Indeed Cardinal George of Chicago recently lamented the rise of a "parallel magisterium" seeking to destroy the faith completely from within. This is all the work of the diabolic, the satanic. We can have no tolerance the devil. Bishops have to vigorously, uncompromisingly, and publically condemn these false and shady groups with an unambiguous and unified voice that is both heard and understood.

Pope John Paul II, as Karol Cardinal Wojtyla, warned in 1976, during a visit to Germany: "We are now standing in the face of the greatest historical confrontation humanity has gone through... We are now facing the final confrontation between the Church and the anti-Church, of the Gospel versus the anti-Gospel...we must be prepared to undergo great trials in the not too distant future, trials that will require us to be ready to give up our lives." St. Paul himself writes in his Letter to the Ephesians: "for we are not contending against flesh and blood, but against the principalities, against the powers, against the world rulers of this present world of darkness, against the evil spirits in the heavens" (cf. Eph 6: 12).

Pope Benedict XVI, as Joseph Cardinal Ratzinger, continued this theme stating in 1997 that the Church in coming years "will assume different forms. She will be less identified with the great societies, more a minority Church; she will live in small vital circles of really convinced believers who live their faith. But precisely in this way she will, Biblically speaking, become the salt of the earth again."

The Gospel speaks of the Church as a whole and of her indemnity from the forces of evil in their full and profound sense. Jesus has thus promised us that "the powers of death shall not prevail against" the Church. To procure and safeguard this remnant flock and achieve victory during this time of great persecution and purification we need to set out immediately on the mountainous path to the good where we will discover more and more the beauty that lies in the efforts demanded by truth.

Three powerful weapons we can use against Satan are: I) The Holy Name of Jesus. That is a name that Satan cannot stand. Because in the name of Jesus every knee will bend in the heavens, on the earth and under the earth. 2) The invocation of the blood of Christ. We are saved by the blood of Christ and therefore in temptation we should call upon his blood for without the shedding of blood there is no remission of sin. 3) Devotion to our Blessed Mother, for at the beginning in the book of Genesis we are told it was the seed of a woman that would crush the seed of Satan.

Indeed, the rains are here and the pope's ship is already sailing. Those who do not climb aboard the barque of Peter while there is still time will be left behind as in the days of Noah.