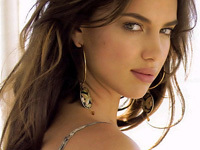 Americans have chosen the most beautiful Russian women. The first in the ranking of the Russian beauties is the current girlfriend of Cristiano Ronaldo, model Irina Shayk. Incidentally, a relationship with a handsome football player not just glorified her, but also made her wealthier. Now, Shayk earns much more than she used to, and fashion experts predict she will be included in the top ten most influential world's top models.

First Place - Irina Shayk. In the past she was Miss Chelyabinsk 2004 Irina Shayhlislamova, born in a mining town of Emanzhelinsk in the Chelyabinsk region. Now she is a well-known model who trapped one of the most eligible bachelors on the planet.

25-year-old Cristiano who has a contract with Real Madrid gets paid a hefty $40 million a year. According to Western press, the Portuguese had already proposed to Shayk. Ronaldo met Irina while filming TV commercial for Armani. 24-year-old Irina had a chance to work with Guess, Lacoste, Missoni, and La Perla, was a face of Intimissimi brand and appeared on the covers of fashion magazines several time, but only after her romance with Ronaldo she was elevated to the status of a top model, and her payments have soared.

The runner-up is Maria Sharapova. Maria, incidentally, is also about to get married. Her fiancé is Slovenian basketball player Sasha Vuyachich who proposed to the tennis player after Lakers vs. Golden State match in Los Angeles. "We're engaged and very happy," said Vuyachich. "I proposed to Maria on the anniversary of our first meeting. Maybe it looks old-fashioned, but I wanted to act like a gentleman."

Third Place - Natalia Vodianova. Cinderella from Nizhny Novgorod once again denied the rumors about her intention to leave the catwalk and her husband, Lord Justin Portman. The mother of three children announced that she will have another child, and for now is going to work to its fullest. "That's not true. I'd never said that. I really love my husband and our divorce is only rumors," said Natasha in a recent interview. "With regard to work, I'm not going to leave the catwalk. I just said that I would not do as many shows as before, because I simply do not have time for this."

Fourth place was given to the winner of the title of Miss Russia 2009 Sofia Rudeva from Saint Petersburg. The beauty became famous online thanks to her intimate photographs where she poses while still a minor. The photos have appeared on the Web before the Miss Universe pageant.

Sixth place is taken by the model Natasha Galkina. She was born in Bataisk of Rostov region. Now she is an American fashion model, actress and producer who works as a correspondent on Channel Chance TV and produces movies and photo shoots.

Seventh place goes to a model Valentina Zelyaeva who resides in New York.

Eighth place is taken by a pop singer Zhanna Friske.

Ninth place is occupied by an American actress of Russian descent Anya Monzikova, who starred in the TV series "Knight Rider," "Plantation" and movies "Tropic Thunder" and "Iron Man 2."

Tenth place is taken by a tennis player Maria Kirilenko.

In October, another authoritative magazine - Esquire - published the "Atlas of Sexuality" which indicated where the most beautiful women on the planet were born, grew up and reside. According to this rating the sexiest Russian woman is Natalia Vodianova who lives in London.