Androgyny's life is never too long? 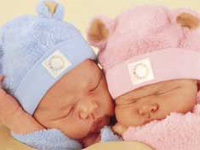 Fortunately, doctors rarely come across cases of abnormal sexual differentiation - the term that is now applied to the phenomenon of hermaphroditism in accordance with international standards. If they occur, surgeons have to perform operations on little babies. Needless to say that it is impossible to find out, whether such a baby would like to grow as a man or a woman.

Andrey Pisklakov, a professor of the Omsk State Medical Academy, believes that the term of ‘hermaphroditism' is entirely unacceptable in the modern society. According to international norms, the correct term to be used nowadays is ‘sexual differentiation disorder.'

"This is an extremely rare situation, but this is a huge misfortune to a family when such children are born. Doctors have to solve the gender-related issue of a baby during the first week of a child's life. A child begins to identify themselves with a certain sex after they turn two years. A child is absolutely intersexual before this age, before they are two years old. But if only you try to tell a three-year-old boy that he is a girl, you will hurt him a lot," the doctor said.

"How does a doctor takes such a decision? Do parents participate?"

"Doctors are not supposed to be under the parents' thumb at this point. In most cases, parents do not simply understand what is going to happen. Sex pathology surgery is the work that defines a person's future. We see a week-old baby, but we are supposed to form the future of the baby, to predict his or her social adaptation. Unfortunately, the development of a person according to the male pattern is not always successful. Aleksey Akulov, a well-known surgeon, described several situations, when a child was operated on at age ten or eleven to become a male. He conducted the surgery to form male genitals for the child, but the child, for some reason, grows to realize that he wants to be a woman. So a young man, a former androgyny, comes back to Dr. Akulov and says that he does not want to have the penis.

"Social adaptation must be planned. Sexual development disorder is a very subtle subject with so many nuances and sophisticated details in it, and parents may not have any idea about them. For example, it is physically easier for us, doctors, to make a child become a boy. However, the anatomical success does not imply the psychological success. A tiny mistake that a doctor can make in this situation may push a child towards committing suicide in the future, when he or she will not be able to perform the usual functions that other people around them perform. Such a child will have serious problems with the reproductive function in the first place. More importantly, when the social adaptation becomes impossible, when a person finds out that he or she is unable to live a normal sex life - these factors, as a rule, make a person feel suicidal.

"There is another very important factor. People prefer to keep such things a secret. A happy couple has a baby boy, but then it turns out that he is actually a girl, and that the son will have to grow to become a woman. Surgeons will do their work properly - this is what they have to do, but parents face a very serious problem at this point. They take their boy to a hospital for a sex-change surgery and then come back home with the same child, albeit of the opposite sex. It's much easier if it all happens in a large city, but only try to imagine what is going to happen if the story takes places in a small town. People can be very mean in their nature. That is why, doctors recommend parents to change their place of residence to keep their secret from the public. If the secret is unveiled, the life of such a child will turn into a nightmare overnight."