Chemical castration or rope and soap for pedophiles? 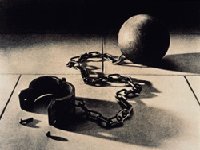 It is hard to imagine a crime more hideous than a crime committed against a child. Russia's well-known lawyer Pavel Astakhov believes that pedophiles could be released from jail ahead of schedule, but they should be castrated prior to their release.

According to statistics, the average age of criminals persecuted for committing violence over children is from 30 to 45 years. According to Mr. Astakhov, authorities must strengthen the punishment for people who commit sex crimes against children. The ombudsman believes that pedophiles tend to commit crimes repeatedly after their release from jail in 90 percent of cases.

"An extensive and serious research has been conducted by American and British scientists on the subject. They have proved that the probability for such people to commit sex crimes repeatedly is estimated at 93-95 percent, unless they are exposed to castration - chemical castration, first and foremost. If such measures are used against them, the probability makes up only two or three percent," news agencies quoted Astakhov as saying.

A Pravda.Ru correspondent called Viktor Semyashko, 49, a resident of the town of Novodvinsk, in Russia's Arkhangelsk region. Semyashko was 25, when he brutally beat a man, who had raped his 11-year-old niece. Viktor was sentenced to six year in a colony for causing severe bodily harm to the rapist. The latter somehow managed to avoid criminal punishment, although he became a disabled individual for the rest of his life as a result of the beating.

"Pedophiles should not be castrated - they should be sentenced to death. Although, if it is impossible to reinstate capital punishment for pedophiles, castration seems to be a good option for them. Just give me an axe, and I will be ready to chop off their genitals personally! I am certain that any normal Russian man will agree to become such a butcher. One should not give pedophiles any food to maintain their disgusting lives in jail. They'd better give them a piece of soap and some rope instead," the emotional man said.

"This is a purely legal problem. If there is such a law, all legal experts will follow it. I do not think that it is correct to express one's personal opinion regarding the issue. Investigators and prosecutors should strictly follow the law and legal acts. That is why I am not going to set out my personal thoughts about castration for pedophiles. However, eight years ago, by some quirk of fate, I was defending a 29-year-old married man at court, who had raped his neighbor's eight-year-old daughter. I believe that I had executed my professional obligations - what else did I have to do? The pedophile was sentenced to life in jail, and I refused to give him any further assistance to appeal the sentence. And you know what? Remorse does not prey upon my mind," Igor Shmidt, a well-known lawyer in the North-West of Russia told Pravda.Ru.

A member of the International Helsinki Group, Tamara Toskunina, stands strongly against castration for pedophiles.

"One should never lobby such an idea! A pedophile or a criminal - he is a human being in the first place. Let him be sentenced to many years in jail, even to life in jail instead. From the medical, or the psychiatric point of view, if a man is castrated and released, will his criminal instincts disappear? It is highly likely that such a man will take revenge for his physical incapability. I believe that this is exactly what is going to happen in this case. Forced castration is an act of violence over an individual, even if an individual is a criminal," she said.

Several countries of the former Soviet Union are currently working on a legal solution for the problem of pedophilia. For instance, the ministry for justice of Estonia will elaborate a program by the spring of 2011 to provide medical treatment to sex criminals. The complex of measures, among other things, includes chemical castration.

Georgia is working on a draft law about pharmacological treatment for pedophiles. The so-called chemical castration is active for a certain period of time only, it is not a lifetime measure. The injection reduces the level of testosterone in the body, making a person less aggressive and sexually inactive.