Lonely Muscovites look for husbands and wives in traffic jams 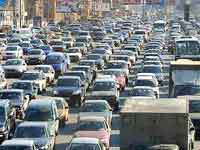 Traffic jams have become an inseparable part of Moscow's every-day life. The time, which Muscovites spend jammed in traffic, is comparable to the time that people normally spend on sleeping. To save their nerves and precious time in jams, drivers and their passengers read, study foreign languages, take part in radio shows and flirt with jam-fellows of opposite sex. Meeting someone in a traffic jam used to be a no-ordinary case before, whereas now a search for love on a blocked road has evolved into passion for many, Vesti.ru reports.

Lonely Muscovites stick ads on their car windows: "Looking for husband/wife" and leave their cell phone number. Brides and grooms of the wheels admit that such a venture does not guarantee a quick result, but it does bring a great deal of calls and increased attention from strangers.
"My story is a funny one. When I was searching for my soulmate, I stuck an ad on my car window. Soon I had a call from a man, who offered me to take his wife, and he was very persistent about it. At first I thought that it was a joke, but then I realized that the man was serious with his offer. "Just take her away from me, I'll arrange everything and you'll both have a great life," he said,"" Valery Alekseev, a traffic jam hunter, told Vesti.

Valery also said that he would receive tens of calls from women responding to his ad. Before he found his soulmate, Valery has had nearly 40 dates.

Varvara, a female resident of Moscow, has been looking for a husband for a long time, but she hung the ad on her car window only three months ago. The woman said that such a way of meeting men was a lot better in comparison with dating websites experience.

"There's no endless correspondence, and you can listen to a person's voice at once, so you can understand many things after a minute of communication on the phone. It's a very positive experience, it makes you feel better because you interact with people, and it's also an opportunity to fight your fears and complexes," the female driver said.

Many other women look for their lifetime partners in supermarkets, libraries, bookstores, hobby groups, courses and airport waiting rooms. Speed dating, a popular trend in Western countries, has reached Moscow too. Internet is not so popular anymore, as it was before. Women say that they often come across fraudsters and sex-obsessed men there.