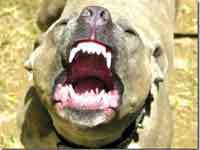 The people living in apartment buildings and working in offices on Moscow's Kooperativnaya Street shudder at the sound of furious barking for six months already. The nerve-chilling sound comes from a large pit bull terrier who lives locked in an old Volga car.

"We found the dog in spring. When we realized that the dog was locked in the car and could not go out for days, we started looking for its owner. We would leave notes with our phone numbers on the windscreen, and the owner of the dog finally responded," an economist working in an office building nearby said.

The owner of the dog did not even think to hide from anybody. The man stated that he regularly takes the dog out of the car and gives him a lot of food. "It's my dog and it's my car, and you should leave me alone. He is fine in the car, and I cannot keep the dog at home," the man said.

The police acknowledged that they could not do anything about the situation - they found no criminal actions in the way the man was treating his dog.

Legal experts also confirmed that there were no legal grounds in Russian laws to make the dog owner keep his dog the way most people do it. They found no evidence to prove that the man was abusing the animal. The dog receives food and regularly goes out of the car for walks.

The dog still sits locked in his tiny jail and slowly goes insane. Cynologists said that the terrier would most likely have his psyche damaged after the locked out experience.

"Pit bull dogs develop inferiority complex if they get isolated from their owners. Many pit bulls are revengeful, and they are smart enough to understand who is guilty of their trouble. If I were the owner of that poor dog, I would be concerned about my own safety," cynologist Andrey Pestov told Pravda.Ru.