Chechen baby born on board Moscow-Grozny plane dies at hospital 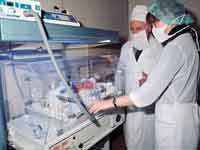 The passenger jetliner en route from Moscow to Grozny (the capital of Chechnya) had to perform an emergency landing at the airport of Volgograd for the second time during the recent several days. The reason of the most recent landing was a pregnant female passenger, who started having contractions during the flight.

Raisa Pikhayeva, a 24-year-old resident of Chechnya, began to give birth to her baby during the flight, and the crew decided to land the aircraft at the airport of Volgograd. The woman was subsequently delivered to the central hospital of the city where she was operated on, Interfax reports with reference to the local administration.

The woman's baby born at the maternity hospital of Volgograd died at the intensive care unit, news agency said. The baby was born prematurely and weighed only 600 grams. The baby's mother, Raisa Pikhayeva, is still staying at hospital after surgery.

"The woman was bleeding when she was delivered to the hospital. She had serious complications in her pregnancy, and we had to perform Cesarean section, although it did not save the baby. The baby was premature, the woman was only 23 weeks pregnant," a doctor said.

Another incident, when the Moscow-Grozny plane had to interrupt its flight, took place last week. The plane performed an emergency landing in Volgograd over anonymous bomb alert, which later proved to be false. There were 73 passengers on board the Yak-42 plane.