Climate Change: The case of the cows' bowels and oregano

To the rescue, to save the planet. Not a sophisticated plan of action drawn up by the world's top scientists, no rocket science engineers, no United Nations brokered scheme to charge the ionosphere with particles to block out the Sun, no climate change summit. Just plain and simple oregano - not on your pizza but in the cow's bowel. 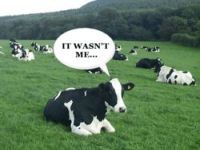 So where does oregano come into the equation?

It has two advantages. Not only does oregano added to the diet of these animals reduce the production of methane gas by 40 per cent but in the case of cows, also increases the production of milk. And this is important because methane is 23 times more harmful to the environment than carbon dioxide in terms of effects on global warming.

Rising up through the atmosphere, it forms a layer round the Earth which retains solar radiation.

And how does it work?

Well, scientists from the University of Pennsylvania, USA, discovered that by adding an oregano supplement to the food consumed by bovines, the methane-producing bacteria in the gut are suppressed. The author of the report, Dr. Alexander Hristov, declares that "The oregano apparently also inhibits other species of bacteria but without affecting the global fermentation process in the abdomen".

The eight cows taking part in the study produced on average one and a half liters more milk than those in the control group, possibly due to the fact that the cows do not lose energy through expelling methane gas (around 7 per cent of the energy stored in the food). This energy in turn is turned towards the production of milk.

16:22
Reuters reveals when Zelensky is willing to end the conflict in Ukraine
15:26
American publicist names the ultimate goal of the game against Russia
14:33
The US will close access to its technologies to the companies supporting Russia
14:29
Russian Finance Ministry refuses to acknowledge foreign debt default
14:02
Teen boy suffers severe injuries as electronic cigarette explodes in his mouth
12:51
Bloomberg: Russia defaulted on foreign debt for the first time since 1918
11:23
Russian Armed Forces block Lisichansk from the south, take hundreds captive
19:07
The EU to provide Ukraine with €9 billions
18:56
UK to provide Ukraine with higher performance rockets for HIMARS systems
18:13
Crisis with Ukrainian grain exports is blown out of proportion - Putin
World
Expert names the four Russian regions that the Pentagon is planning to strike

USA won't save its mercenaries in Ukraine as supremacy comes first Lyuba Lulko
Russia
Kremlin: Default in Russia? Not our problem
World
Bloomberg: Russia defaulted on foreign debt for the first time since 1918