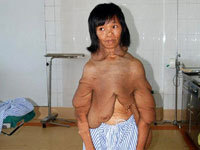 An extremely rare disease has been disfiguring the body of a Chinese woman for years. Now the woman looks like a melted alien. The tissues of her body have been sagging making the woman look like an extraterrestrial creature. The woman is desperate; she believes that she will never be able to lead a normal life again, and she is only 43.

The disease, known as neurofibromatosis, affected Tan I when she was 20 years of age. At first the young woman disregarded the rare inherited disorder. Now medics are not certain whether modern science can do anything to help the poor lady.

The tissues of Tan's body loose elasticity, flexibility and sag. Specialists calculated that the growths on the woman's body weigh about 20 kilos. They acknowledge that the patient has lost a lot of time and now there is no definitive answer as to whether it could be possible to have her body returned back to normal.

Neurofibromatosis (commonly abbreviated NF) is a genetically-inherited disorder in which the nerve tissue grows tumors (i.e., neurofibromas) that may be harmless or may cause serious damage by compressing nerves and other tissues. The disorder affects all neural crest cells (Schwann cells, melanocytes, endoneurial fibroblasts). Cellular elements from these cell types proliferate excessively throughout the body forming tumors and the melanocytes function abnormally resulting in disordered skin pigmentation. The tumors may cause bumps under the skin, colored spots, skeletal problems, pressure on spinal nerve roots, and other neurological problems.

Neurofibromatosis is autosomal dominant, which means that it affects males and females equally and is dominant (only one copy of the affected gene is needed to get the disorder). Therefore, if only one parent has neurofibromatosis, his or her children have a 50% chance of developing the condition as well. The severity in affected individuals, however, can vary (this is called variable expressivity). Moreover, in around half of cases there is no other affected family member because a new mutation has occurred.