In her biography, Natascha Kampusch accuses police of negligence 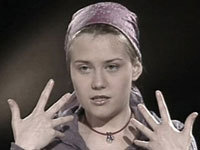 Natascha Kampusch, kidnapped and kept in captivity for eight years before escaping from her kidnapper in 2006, has published her autobiography in which she accuses the police of negligence in the search after her disappearance in 1998, when she was 10 years old.

The gunman could have been "detained if the matter had been taken seriously, it's something I learned only after the end of my kidnapping," says the girl, now 22, in her book Tage 3096 (3096 Days), the amount of time that her abduction lasted.

Excerpts from the book Tage 3096 (3096 Days in German) were read at a bookstore in Vienna.

In the book, Natascha Kampusch tells of the first days in the 5 square meter hiding place under the Strasshof house near Vienna, where her kidnapper, Wolfgang Priklopil, held her after having taken her when she went to school. Back then, when she was 10 years old and was a big fan of crime shows. Natascha imagined the police trying to save her, seeking traces of DNA on her dresses.

"But on the surface the reality was quite different: the police did nothing," she complains in the work published on Wednesday in Austria. There were police officers, a few days after her disappearance, that went to the home of Priklopil, searched his residence and his vehicle, the same used in the abduction. Priklopil had no alibi for that day, but police did not investigate this trail.

When she managed to escape, Natascha had no better treatment: she took refuge in the garden of a neighbor, who she asked to call the police. There she saw two police cars arrive and the police ordered her not to move and to put her hands up. "Hands up, like a criminal, I explained to them who I was," she reported, adding: "This was not how I imagined my first moments of freedom."

While she was telling the police how it had been during the eight years of her ordeal and her escape, she felt some suspicion because of having escaped alone. The police were "not in this case the rescuers, but those who had failed for years" to free her.

Priklopil committed suicide at age 44, soon after realizing that Kampusch had escaped. Natascha said she cried when she learned that Priklopil had committed suicide by throwing himself in front of a train on the same day of her escape. 'With my escape, not only did I free myself of my abductor, also I lost a person who forcibly had gotten very close, she wrote in her autobiography.

This attitude fueled speculation, leading to the belief that she had developed a sympathy for her abductor and would protect his accomplices. The young woman denounced this theory: "It seemed to the authorities that it was easier to believe that there was a conspiracy surrounding this crime than admit that they failed to locate the offender during that time who acted alone and kept his innocent appearance."

The Austrian also said the kidnapper, whom she classifies as "paranoid," was attacking her physically. "Dated August 23, 2005: At least 60 punches in the face with his fist on the head to cause nausea. Seventy blows with the knee in the Coccyx ..." and the deprivations: "I was just skin and bones ... and with spots on my body, like those of corpses." She also talks about his suicide attempts, but never the sexual abuse to which she was the victim, explaining simply, "I want to keep for me one last corner of my private life."

In captivity, she recalls getting a beating up to 200 times a week, she was handcuffed to him in dividing the bed and was obliged to work half-naked as a domestic slave. She also comments on the excerpt published in her autobiography, about the trauma of lack of human contact in captivity. "I was still just a child, and needed the solace of human touch. Then, after a few months as a prisoner, I asked my kidnapper to hug me," she reports.

The revelations, made more than four years after she escaped from captivity in August 2006, make part of the book of memories of Natascha, now 22 years old.

The young student of languages, who finished high school last year, read her book on Thursday evening at a bookstore in Vienna as part of promotion campaign for her publisher.