Yulia Tymoshenko, Ukraine's probably most prominent politician, is a soft and feminine lady, and not only in appearance. A new entry in her personal blog dedicated to her beloved husband Alexander is a great evidence of this. 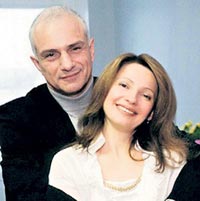 “There are people (very few of them, unfortunately) you can always rely on in the most difficult moments. You know that they will never betray you, will not turn away from you, and will not condemn you. My Alexander is like this. And not because he is my husband, but because he is a Real Man, for 120 per cent,” Yulia is convinced. “We were together in the same detention facility in Lukyanovka. It is clear that my husband was thrown to jail just because he was careless enough to be my husband ... One evening I was led to the interrogation, and so was he. Our eyes met for just one brief moment. But this was enough for me. I got a boost of energy, faith and courage that would seem to endure everything and withstand everything. It seemed that I was not the only one who felt it, even the prison authorities felt it. The next day, Alexander was immediately transferred to another prison in Zhytomyr region. He handed me a note directly into the camera. He wrote only four words “Do not give up…”

Yulia met her future husband when she was 18. He called a wrong number, the young people started talking, and a year later they had a daughter, Eugenia. Alexander Tymoshenko is a reserved person who rarely appears in public and does not talk to journalists.

It turns out that at some point, Alexander Tymoshenko asked his wife to include him in the electoral list of BYuT and had his applications rejected. “I was in the middle of some very important meeting, and my husband was waiting in the waiting room. An hour, another hour, and another one… Finally he broke down and gave me a note, or, rather, an application. It said: please consider the possibility of including me in the electoral list of BYuT. . . And it was this time in the country when almost all of my relatives and friends were in prison. And his mandate, believe me, was not a luxury but a means of self-preservation. In the statement, I wrote: “Deny.” And we never returned to this subject again,“ Tymoshenko recalls.