Natalia Pereverzeva, a student of the Financial Academy of the Russian Government, has won the 15th annual beauty pageant Miss Moscow 2010. The most beautiful Muscovite is 23, although her modeling agency says she is 21, RIA Novosti reports. 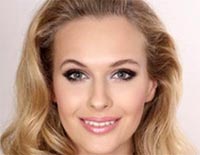 The winners of the beauty contest were awarded on July 1 at Et Cetera Theater. Since the year 2010 in Russia has been proclaimed the Year of the Teacher, the show had a school theme to it. The contestants appeared on stage dressed in school uniforms. They also displayed the art of wearing cocktail dresses, swimsuits and sports outfits.

The contestants also took part in the fashion show to model a unique collection of Ronnati shoes. The women graced the catwalk wearing stilettos encrusted with Swarovski crystals.

The pageant ended with a “prom” in which primary attention was paid to ten finalists. Miss Moscow 2010 Crown was awarded to Natalia Pereverzeva. She received the tiara and the ribbon of the winner from her predecessor, Yulia Obraztsova. Now Natalia will represent Moscow at Miss Russia beauty pageant.

Natalia Pereverzeva is 21, she is 177cm tall, breast-waist-hips: 89-60-89. She is a fourth-year student of the Financial Academy of the Russian Federation Government. Natalia advocates animals’ rights and is a vegetarian. She goes in for sports and is fluent in English (also studies French).

Her dream is to make the world a better place; her lifetime goal is to be a good mother, and a role model for her children. Most of all, she treasures family values and good health of her loved ones.

“I did not expect that I would get the crown. I thought that it would just be good to take part in the contest. It took me months to get ready for it – I was taught how to walk, how to eat properly, how to speak and how to dress up. We had many consultations with dietitians, who told us why people gain weight and how to avoid it. I dedicate my victory to all of my relatives – my parents, my friends and to my boyfriend. I hope that he will be able to travel with me if I have to travel with my new status,” the winner of Miss Moscow 2010 said.