A funny and yet immoral incident took place in the cultural capital of Russia, St. Petersburg at night of June 14. The drivers, who did not manage to cross the Neva River before the bridges had been raised, became witnesses of something absolutely unforgettable. When the Liteiny Bridge was being raised, the people around could notice that there was something unusual in the process. When the two parts of the bridge stood out, everyone saw a giant picture of the penis on it. The infamous graffiti measured about 65 meters long and 27 meters across. 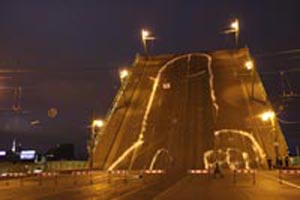 It is not really clear why someone decided to draw such a picture on the bridge in the very center of the city. Hooligans probably wanted to play a dirty joke on those drivers who did not catch time to cross the bridge. “Too late” – this could be the message of the bridge penis.

“Two fire brigades were fussing about near the bridge trying to wash away this piece of pop art,” a local blogger wrote.

It later turned out that the “masterpiece” was created by a group of young men. They meticulously planned their action, although their activities were not left unnoticed.

“The workers working near the Liteiny Bridge noticed the hooligans and tried to stop them. They even caught one of the men,” an official said.

The detained “artist” will have to carry responsibility for all of his team.

The giant drawing was very hard to remove. The picture of the penis had to stay on the opened bridge during the whole night before 5 a.m. when the bridge was lowered.

All opening bridges across the Neva River in St. Petersburg are equipped with surveillance cameras. It is still a mystery how the hooligans managed to complete their action.

“They are not actually surveillance cameras – they are technological cameras. They are used to see if the traffic flow across the bridge has stopped or not,” an official said.

The detained activist of art group Voina (War), Leonid Nikolayev, was sentenced to a fine for disorderly conduct. The court did not see any vestiges of vandalism in the action since the drawing had not interrupted the work of the bridge.

The gigantic phallus on the Liteiny Bridge appeared in front of the building of the Federal Security Bureau Directorate of St. Petersburg. The members of the art group made the drawing at about 1:30 a.m. when the bridge was already empty, but not opened. It took them only 23 seconds to draw the infamous graffiti: they simply poured the white paint out from canisters onto the asphalt surface.