Leonid Stadnyk, the world's tallest man alive, has no regrets about “fleeing” The Guinness Book of World Records. Today he is living a reclusive life, dreaming about travelling and looking for a fiancé. 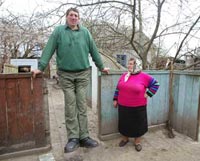 The 8.4 feet guy was born and lives near Chernobyl in Zhytomir region. There are virtually no roads, so the only means of transportation is horses and carts. The area is called Chudnovsky, which means “odd” in Russian, and not without reasons. The heaviest person in the world, Vasily Yanov, 992 lbs, was born and raised here as well. Stadnyk is the main miracle in the area. He is a kind and intelligent person who graduated from high school and college summa cum laude. Now all benches bend when this 440lbs giant sits down. A football looks like a tennis ball in his hands, and a gallon jar looks like a glass.

Leonid was almost the shortest kid in his class, liked to climb trees and play soccer. At age 12 he had a surgery that caused pituitary dysfunction and changed his metabolism. He started growing fast, and his parents could not buy him new clothes fast enough.

People in his village call him a big guy with a big heart. He is well respected by his peers. There are no children in the village, so he is not being teased. He lives with his retired mother and single older sister. There is a custom-made bed manufactured in Germany in his room, custom-made shirts, a tie as long as a regular person, and a 5 feet long belt.

There is not a single mirror in the house. Stadnyk hates his height. He walks around the house bending or squatting since the ceilings are only 8.5 feet.

There is some equipment in his yard – a broken tractor and a huge broken bicycle. There is also a rusty Chevrolet given to him by Viktor Yushchenko during his presidency. Leonid cannot get a driving license because of vision issues.

He used to work as a chief veterinarian at a remote collective farm. Once in winter he froze off his legs and then broke his ankle. He has been staying at home for the past three years receiving benefits. He does not leave his property, and says he is growing grapes and new types of berries.

The Ukrainian was officially acknowledged as the tallest man in the world and placed into the Guinness Book of Records only two years ago. This has not made his life easier but added some issues.

“I could kill the person who told about me on the Internet. I lived in peace for so many years and suddenly I get all this attention, I can’t stand it. All my life I have been trying to be unnoticeable,” the man complained.

It looks like Leonid is indeed sick and tired of journalists. He remembers shameless behavior of some of them:

“Once I got out into my yard and saw a journalist standing there. Not only he did not bother to announce his arrival, but he was tipsy. He told me: “Let’s take a picture together for fun!” I shook his hand for fun so hard that his screaming could be heard in a neighboring town.”

A year ago Stadnik voluntarily took his name out of the records book by refusing the mandatory measurements. Now he is replaced by a resident of Turkey who is 4 inches shorter. Leonid has no regrets: “I think that only those records that were achieved through effort should be recorded. My height is not my achievement. I don’t need it. My land feeds me, not my title. I still get up at 5:30am as I used to because I have almost two hectares of land to take care of.”

Today the 30-year old giant lives a reclusive life and feels comfortable only around family and friends. He wants to be able to make money and be independent. He is dreaming of travelling the world and visiting Moscow. He also prays that his mom is healthy since he would not be able to survive without her.

Meanwhile, his mother and sister cannot wait for him to get married and give them grandchildren, nephews and nieces. He is ready to do it, but cannot find a girl in his native village. He made his own website and has three e-mail addresses. The ladies are not eager to write to him yet. Leonid noticed some German model well over six feet tall, but is afraid to write her.

“I understand German since I studied it in school, and can write with a dictionary. But I would really love to have a wife that does not require a dictionary. She does not have to be a Ukrainian, I speak Russian well, too.”

American scientists have been observing Leonid for a long time. They came to Ukraine, conducted some tests and stated that the tumor that made him tall miraculously disappeared. His hormonal level is normal, and his condition will be improving.