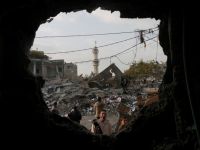 One hour ago, on Monday (07) Israeli soldiers killed four members of an armed group of Palestinian divers on a boat at the heights of Gaza, said the army, which claims "to have foiled a terrorist attack." A chief of the Brigades of Martyrs of Al Aqsa, an armed group linked to Fatah, the party of Palestinian Authority President Mahmoud Abbas, confirmed to AFP that the four dead were activists, but stated that it was a question of a training and not an operation.

"According to Palestinian witnesses, the boat in which the activists was attacked by Israeli motorized boats and helicopters was on the coast of Palestine, the height of the Nuseirat refugee camp, south of Gaza City. Two hours later, the lifeless bodies of four people wearing wetsuits were rescued. The search was continuing to try to locate two other passengers reported missing."

Questioned by AFP, a spokesman for the Israeli army confirmed that a Navy patrol sighted a boat with a group aboard on the way to carry out a terrorist attack, "without elaborating."

Still according to the AFP: "Amid international pressure because of intercepting humanitarian missions to Gaza, Israel announced it had expelled the 19 people who traveled aboard the Irish ship "Rachel Corrie," which tried to bring humanitarian aid to the Palestinian territory.

Five Irish citizens, among them the Nobel Peace Prize winner Mairead Maguire, a defender of the Palestinian cause, left the country early on a second plane to Dublin. A Cuban and six Malaysians - Mr. Mohd Nizar Zakaria, two television journalists from Malaysian TV3 and three employees of the Perdana Global Peace Organization - had been expelled on Sunday at the border crossing on the bridge leading to Alenby, Jordan. The other seven members of the humanitarian mission - six Filipinos and a Briton - also left Israel on Sunday."

"[...] In this context, the Iranian Red Crescent said it will send three boats, two of them before the end of the week, and a plane of humanitarian aid to Gaza. "We are renting two boats, which carry approximately 70 humanitarian workers, nurses and doctors, and another with medicine and food for the population of Gaza," said the director of the International Red Crescent, Abdolrauf Adibzadeh, state television reported. The Iranian Red Crescent will also send a plane loaded with 30 tons of humanitarian aid to Gaza through Egypt." [...]

Turkey, which adopted diplomatic sanctions against Israel because of the attack on their ship, ruled out any normalization of relations with Israel if the Jewish state refuses an independent UN investigation, as the Turkish Foreign Minister, Ahmet Davutoglu, said on Monday . "If Israel gives its approval to the creation of an international commission and is willing to respond to this commission, of course the relationship will take another path," the chancellor declared to reporters. "But if Israel continues avoiding this, the normalization of relations will be totally excluded," he added.

According to Vermelho, yesterday the Israeli ambassador to the United States, Michael Oren, said his country would not apologize to Turkey for the deaths of nine activists, or accept the opening of an international inquiry to investigate the attack on the fleet. The foreign ministers of France and Britain urged Israel to accept at least an "international presence" in investigating the incident.

According to the RTP in Portugal, a meeting of Foreign Ministers of the Organization of the Islamic Conference (OIC) last night in Jeddah, Saudi Arabia, ended with an appeal to member countries in order to "reconsider" their relations with Tel Aviv. The final communique of the meeting also expressed the conviction "in the strongest terms" the "brutal aggression of Israeli forces in international waters against civilian ships carrying humanitarian aid."

The Foreign Ministers called upon the Secretary-General of the United Nations, Ban Ki-Moon, to "establish an independent international commission of inquiry to determine, to prosecute and punish those responsible for the civilian deaths." The Turkish government seeks to capitalize on a summit this Monday of 20 countries-members of an Asian security group to enhance the diplomatic pressure on the Executive Benjamin Netanyahu. Nine heads of state and government, including the leaders of Iran, Mahmoud Ahmadinejad, Syria, Bashar al-Assad and Russian Prime Minister Vladimir Putin, will be present in Istanbul for two days for the Conference on Measures of Interaction to Increase Confidence in Asia."

"Ankara has already taken the first steps to reduce military and commercial relations with Israel. Discussions around energy projects have been suspended, including arrangements for the supply of natural gas and drinking water. In the absence of a formal apology on the part of Tel Aviv, the government of Recep Tayyip Erdogan threatens to disrupt relations with Israel on all fronts." (Original RTP)

Description of the Siege is Close to Nazism

See an excerpt below from the article "Gaza: a people suppressed by the blockade," in the newspaper, Joan Duarte of Brazil, and draw your own conclusions.

"[...] Because of the blockade, about 80% of Gaza's population depends on international aid to survive. According to official figures, more than half the population lives below the poverty line and at least 40% are unemployed. Lacking natural resources, the Palestinians in Gaza suffer from a chronic shortage of water and they have almost no industry. According to data of the United Nations Food and Agriculture Organization (FAO), 61% of them live with food insecurity.

Humanitarian agencies and UN officials acknowledge that assistance provided to the region is not sufficient to meet the needs of the population of the territory, nor to rebuild the region devastated by an Israeli army operation in 2008. In the last two years of deadlock, the amount of aid that arrived in Gaza rarely reached 20% of total goods that Israel allows to reach the territory, denounced the American lawyer Allegra Pacheco, who works for the UN Development Programme (UNDP) .

"Recently, the UNDP published a report saying that the international community has not been effective in meeting the basic needs of Gaza's population, either by omission or intent," Allegra punctuated.

Israel still maintains a list of items prohibited from entering Gaza, according to the security authorities of the country, items they contend could be used to make weapons such as metal pipes and fertilizers. But according to the Israeli NGO, Gisha, which monitors the passage of goods into Gaza, many other products - ranging from cars to lamps and pans, chocolate, coffee, paper and computers - often have been refused entry because they are considered luxury items.

"The attempt to control Gaza from Israel through the power of the food of its residents and specific lists of imports allowed, tarnishes the reputation and morale of the country and increases its international isolation," said Aluf Benn, Haaretz columnist. "All Israelis should be ashamed of the list of goods prepared by the Ministry of Defence, which allows the entry of cinnamon and buckets of plastic into Gaza, but does not allow plants and coriander. It's time we find more important tasks for our bureaucrats to do besides update lists arbitrarily."

Despite numerous requests made by humanitarian agencies to the district court of Israel, authorities refuse to disclose the criteria that guides them in determining what goods are allowed or prohibited into the Gaza Strip.

"If any product can enter Gaza except those that could be used to manufacture weapons, then the military that operate in the border crossings are unaware of this policy, since they are not acting according to it," concludes the director of the Legal Department of Gisha, Feldman Tamar. "Gaza Strip: "It's like living in hell."

Matter of Rodrigo Craveiro, of the Correio Braziliense:

"Life in Gaza Strip seems to go against the grain of hope. The blockade imposed by Israel suspended desires, canceled ambitions subverted modernity itself. The routine in the house of engineer Ghassan Abdulmandil, 35, is made from power outages, rationing and psychological trauma. A resident of Gaza City, he needs a cornea transplant, but cannot cross the border - controlled by the Israelis - to undergo surgery.

The dream of being awarded a post-doctorate in economics for the moment was forgotten, as well as the semblance of having some relatives. The last time I saw Ghassan's family was in Syria on September 30, 1995. Asked by the Mail about what is to become of Palestinians in the Gaza Strip, there was no delay in responding: "It's like living in hell."