Ellen Church, the first American flight attendant, had her first professional flight in May of 1930. She met all requirements being under 25 years old, no taller than 5 feet 3 inches and no more than 115 lbs. 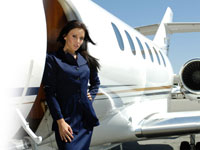 Pretty smiling ladies were meant to relax tense atmosphere and distract passengers from thoughts about a possible plane crash. Responsive, confident and helpful flight attendants were appreciated by men. Ellen Church married a banker, and she is believed to have said “Champagne poured at the altitude of 33 thousand feet is the strongest aphrodisiac.” Flight attendants would marry sultans, prime ministers, billionaires and Hollywood stars.

In the late 1980s, Greek Prime Minister Andreas Papandreou married a flight attendant Dimitra Liani. Giving his post-election speech, he said: “Thanks to the Greek people and Dimitra.” The Greeks had controversial opinions about Dimitra. At some point front pages of all newspapers displayed her topless beach photos. On the other hand, it might have been his love for Dimitra that gave Papandreou strength in his last years.

The Greek Prime Minister met Dimitra when he was nearly 70 and she was a little over 30. Papandreou, a famous sociologist and friend of Yasser Arafat and Indira Gandhi, who went through political prisons and tortures, fell in love like a young kid. He was married and had four children but would not give up Dimitra. Once he showed up with her at a meeting of European leaders where first ladies were not invited while they were not even married yet.

In the 1990s first ladies-flight attendants appeared in Australia, Island and Russia. Ludmila Putin, Vladimir Putin’s wife, was a flight attendant prior to her marriage.

Among current world leaders, Prime Minister of Israel Benjamin Netanyahu is married to a flight attendant, this being his third marriage. Netanyahu's former advisor, Benny Briskin, told AiF that Netanyahu met Sarah when she worked as a flight attendant for Israeli “Tel Aviv” company. Since flight attendant positions are rarely permanent in Israel, Sarah also worked as a psychologist in a social service in Jerusalem. Sarah’s noble profession does not protect her from continuing media attacks. This year journalists were all over the law suit brought against Sarah by her housekeeper. The claimant said Sarah made her bring four changes of clothes to work every day, shower several times a day, and call her madam.

In his attempts to protect his wife, Prime Minister Netanyahu said at a recent press conference “Attack me! Leave my wife alone!”

The richest people on the planet are also eager to share their lives with flight attendants. Roman Abromovich met a blue-eyed flight attendant Irina Malandina when he was on his way to Germany. They got married a few months later. Irina and Roman have five children together and their marriage lasted for 15 years. The wealthiest person on the planet, Brunei sultan, was also married to a flight attendant. They met when she was pouring him a glass of champagne and spilled half of the bottle.

It would be wrong to think that the flight attendant’s profession is nothing but glamour. During plane crashes or terrorist attacks fragile ladies have to take the first blow. In 1970 the name of the flight attendant Nadezhda Kurchenko became famous in the USSR. Monuments were erected in her honor, poems were written, and mountain peaks were given her name. She was killed in a terroristic attack on board the plane from the town of Batumi to Sukhumi and Krasnodar. Several minutes after the plane took off, two armed passengers, father and son Brazinskas from Vilnius, hijacked the plane. They demanded that Nadezhda tells the pilots to take a course to Turkey. At the time pilots’ cabins did not have blocking devices. The girl covered the door with her body. Trying to warn the pilots, she was crying “Hijacking!” She was shot point blank. She was to get married three months later. She was awarded an Order of the Red Banner post mortem. In that attack terrorists injured crew members and managed to get the plane to land in Turkey. None of the passengers were injured, and they were picked up by another Soviet plane in Turkey. The terrorists surrendered to the local authorities.

A year after the tragedy that shook the country, a song was written by a famous Soviet song writer Alexandra Pakhmutova, called “Nadezhda” (which also means “Hope” in Russian). All pilots and flight attendants of the USSR decided that it was an unofficial anthem to their diseased colleague.