It is believed that every sensible lady should dream about a luxurious wedding and an early marriage. Yet, the conclusions made by scientists may change this popular opinion. 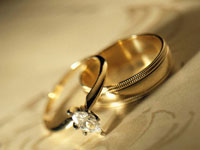 We collected the results of the latest research on the influence of marriage on male and female health and compared what gender gains more by getting married.

Less pain. An unusual experiment conducted by scientists from Virginia University revealed that married women are less susceptible to pain. Merciless scientists gathered several dozens of married couples and observed how their brains reacted to a series of weak electric shocks. Women’s pain centers showed much less activity than those of their husbands.

The presence of a permanent partner, not necessarily a spouse, can be a decent painkiller. Six months ago British physiologists found out that petting, hugging and simple touches of a beloved person release significant amount of the so-called hormones of happiness that are natural pain killers.

Less stress. Some ladies (as well as men) will find it hard to believe, but their spouses affect their nerves not only in a negative way. At least husbands help to forget all work worries and problems and leave them behind the threshold, which results in a less stressful life for married women. These were the results of a research conducted in 2008.

Less diseases. This advantage only applies to those ladies who managed to marry a wealthy man. More precisely, it is not the man’s capital that matters but his social status which should be a bit higher than the status of his wife. Tara Parker-Pope, a psychologist, claims it to be the basis for a healthy and long life.

Shorter life. A number of studies revealed that a happy marriage prolongs a woman’s life. However, these studies did not take into account social status and life conditions of those tested. Taking these factors into consideration it turns out that marriage takes 1.5 to 2 years of woman’s life, and even more in some cases.

The situation is worse when a woman is significantly older than her husband. According to the studies conducted by Max Planck Institute for Demographic Research, a woman who marries a man 7 to 9 years younger increases her risk of premature death by 20%.

Larger waist. Tense relations with the husband have the same effect on the weight as love for hamburgers. Women who are not happy in their marriage are more prone to gaining weight, usually have less healthful nutritious habits and have a higher risk of diabetes and other diseases caused by excessive weight.

Higher blood pressure and cholesterol level. Unhappy family relations affect cardiovascular system. Women not happy in their marriages often end up in intensive care units with heart attacks and strokes. One of the studies revealed that heart issues are frequently caused by wives’ criticism of their husbands.

Lower spirits. If relationships give a crack, women are more prone to long depressions than men, says Psychological Medicine magazine. According to New Zealand scientists, double role of a housewife and career woman makes women less stable, which makes them more vulnerable to various mental diseases.

Lack of sleep. Men snore twice more often than women do. According to the calculation made by British scientists, a snoring spouse reduces sleep time by three hours a night, which may cause overstrain, excessive weight, heart issues, concentration and psychological issues.

Longer life. Scientists calculated that single men die 7 years earlier than their married counterparts of the same age. The risk of premature death drops immediately after marriage. It may be explained by the fact that many men quit their bad habits as soon as they put a ring on their finger. Married men visit doctors more frequently and eat more healthful food. Obviously, these advantages disappear immediately after a divorce.

Lesser risk of a stroke. According to the study conducted by a Tel Aviv Institute, married men have 64% less risk of getting a stroke than single men. This is true only for happy marriages. Family issues, on the contrary, increase the chance of blood vessels blockage and consequences.

Younger looks. Unlike women, men who marry much younger women reap benefits of such marriages. First of all, young wives miraculously increase their husbands’ life expectancy. Second, according to Swiss sociologists, women must be at least 5 years younger than their spouses to increase chances for long and happy family life by 20%.

Better chances of winning against cancer. Wives seem to be helping spouses to fight cancer more efficiently. There is no data on what exactly influences cancer patients, motivation for life or support of the beloved ones. There is data, however, that shows that married men live longer after the terminal diagnosis. The chances to live five years among married men are 63.3%, while for single men they are only 45.4%.

Scientists believe that women are more willing to “share” their company with their partners and encourage them to participate in meetings and parties. Men, on the contrary, do not like to let women into their male circle.

Weight issues. Life with a beloved partner increases obesity risk for men three-fold, and for women twofold. 25% of men start gaining weight with their wives during the wives’ pregnancies.

Weaker immune system. Never-ending conflicts with wives weaken male immune system and interfere with their bodies’ ability to fight diseases, say doctors from the Ohio State University. Experiments show that wounds on the bodies of men unhappy with their marriages heal slower.

Let us do some simple math and subtract minuses from pluses for each gender and see who wins. The score comes out to be 2 : 3 in favor of men.