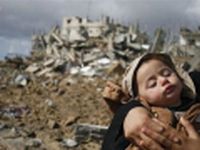 Ever since the Palestinian people exercised their rights in a free and fair election, voting the Hamas government in to represent them, they have been pounded by violence and illegal weaponry and starved, humiliated and forced to live without the basic necessities of life. You see, under the west's definition of "democracy," democracy is nothing more than doing what Washington or Tel Aviv tell you to do. One thing you must do is vote the way they tell you, otherwise there are consequences.

The initiative, known as the Freedom Flotilla, arrives in Gaza tomorrow morning. The convoy ships will be carrying more than 10, 000 tons of humanitarian aid including medical supplies, building materials, 100 prefabricated homes and 500 electric wheelchairs for the handicapped.

They sound like a real threat to the security of the State of Israel, especially those electric wheelchairs. Why a Palestinian might just be able to run over the toe of an Israeli occupation force member before seeing their child shot to death in cold blood.

Israel has vowed to stop the Freedom Flotilla at all costs. At all costs? Why? Is it because they have the hand of Washington protecting them in everything they do? There is no crime they can commit that Washington will not protect them from the consequences of.

According to international law, Israel has no authority over Gaza’s waters. So perhaps they should worry only about their own border. However, at this point, they haven't decided where that border ends. What's theirs is theirs and what's yours is theirs too. Right to exist? That is only for Israel and Israelis.

Humanitarian aid means nothing to Israel, they thought nothing of throwing Green Party American political activist Cynthia Mc Kinney into jail as she tried to assist in the delivery of humanitarian aid. Cynthia was engaged in delivering terrible weapons of mass destruction to Gaza: crayons for Palestinian children.

When will the world community stop looking the other way as people are starved and denied the basics for life? When will they stop looking the other way while innocent civilians are used to test the newest weapons technology? How many burned and maimed children, how many starving, dying, malnourished children are going to finally make them open their mouths? One of the favourite tactics of these psychopaths is to kill with silence.

In light of these well documented facts regarding the treatment of Palestinians, perhaps Israel should stop trying to insult our intelligence by playing the victim card.

Is this story being offered on CNN, BBC, Fox, MSNBC, New York Times, the media of a so-called open democratic society? No, they have completely failed to even mention the name "Freedom Flotilla."

In Israel you have a bunch of sociopathic, genocidal lunatics running the place, planning a Greater Israel. Ethnic cleansing, apartheid and genocide are all everyday commonplace practices there. General Moshe Dayan once said, "Israel must be like a mad dog, too dangerous to bother." Trouble is, these mad dogs have broken out of their territory, mouths foaming, ready to attack and eliminate anyone not of their own kind.

Israel is the sixth largest nuclear power in the world. It is the only country in the Middle East with a huge nuclear stockpile. Why the noise about Iran, a country that only wants nuclear power for peaceful purposes? Iran has not used weapons of mass destruction on anyone, unlike Israel. Iran has not engaged in war activities against neighgbors in over 200 years, unlike Israel.

It is obvious Israel has no interest in peace, nor in the fair treatment of their Palestinian neighbors. The blood of these people and those that may be killed in the future is on the hands of each and every person who remains silent and allows these gross injustices to continue.