World's Heaviest Mother Starves Herself for Her Child

Medical professionals developed a special weight loss program for the heaviest new mother in the world. 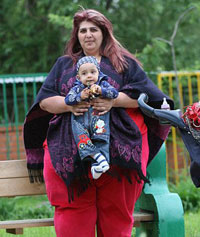 World's Heaviest Mother Starves Herself for Her Child

Despite doctor’s predictions, a Muscovite who weighs 1,100lbs gave birth to a healthy boy. Now she sticks to a diet that was specially developed for her by medical professionals.

On May 15 Nonna’s son turned 1, and his mother decided to lose weight.

She was assisted by a famous dietician, the author of the individual food intolerance method Anatoly Volkov.

“I went to his clinic where I was tested, “Nonna said to Life News. After talking to him I realized that this was the doctor who will help me to lose weight. First I was given a list of forbidden and allowed foods.”

“ Doctors always said I should not drink much liquid . Volkov, on the contrary, is convinced I should drink more often. In the morning I have to drink a glass of water mixed with one teaspoon of baking soda on a empty stomach.”

Now the woman usually eats boiled eggs and fruit for breakfast, fish or other seafood and a vegetable salad for lunch, eggs and a small portion of fish for dinner.

The main principle of the diet is to exclude the products that are harmful for Nonna.

“The doctor says that I have to restore my internal organs that do not work properly. I need to restore my metabolism . It will take me two to three years, and if everything goes well I will start losing weight,” Nonna says.

Her son Richard is a medical miracle. He was born despite doctors’ predictions. It is surprising that Nonna managed to get pregnant with her weight and carry a healthy baby. The doctors were saying that Nonna’s desire to give birth was a suicide.

Now Nonna weighs approximately 880 pounds. But this insignificant loss still does not allow her to stand in line for baby food, or walk with the baby as much as needed. A year ago, when Life News told about the mother, many wanted to help her, including officials. Yet, their sympathy was no more than words.

The happy mother is hopeful. Now she focuses all her attention on her son who is growing healthy.

“We have nine teeth! It is too bad that his grandmother cannot see him because she cannot get a US visa. She calls us often, and Richard talks to her on the phone.”