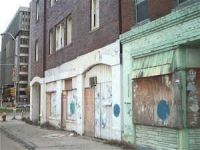 On February 18th, Joe Stack, a computer engineer 53 years old, killed himself crashing his small plane into a building in Austin, Texas, destroying an office of the Internal Revenue Service (IRS, in its acronym in English) killing another person while many more were on holiday at the time of the act.

Stack left a manifesto against the government explaining his actions. The story begins when he was a teenager who lived in poverty in Harrisburg, Pennsylvania, near to the heart of what was then a major industrial center.

His neighbor, an octogenarian who lives off cat food, was the widow of a retired metalworker. Her husband worked all his life in the foundries of central Pennsylvania, confident in the promises of big business and the union that, with their 30 years of service, they would have a pension and medical care during their retirement.

"Instead, she was one of thousands who did not receive anything because the incompetent administration of the foundries and the corrupt union (not to mention the government) who made speculative ventures into their pension funds and stole her retirement. The only thing she had to live on was social security."

Here it could be added that the very rich and their political allies continue trying to end social security.

Stack decided he could not rely on big business and that started him off on his own path, only to discover that neither could he trust a government which was not interested in him or people like him, but only the rich and privileged, or in a legal system in which "there are two 'interpretations' of each law, one for the very rich and one for the rest of us."

The government leaves us with "the joke we call the American health system, including the insurance and pharmaceutical companies (who) are murdering tens of thousands of people a year," by rationing care, largely based on wealth (the ability to pay) and not on need.

Stack tracked the origin of these evils to a social order in which "a handful of thugs and looters can commit unthinkable atrocities ... and when the time comes that his source of easy money runs out under the weight of their greed and overwhelming stupidity, the strength of the entire federal government has no difficulty to come to their aid in a matter of days if not hours."

Poignant studies of industrial zones in the United States show a comparable indignation among individuals who were displaced as corporate-state owned programs shut factories and destroyed families and communities.

An acute sense of betrayal is perceived in the people who were convinced they had done their duty to society in a moral pact with business and government, only to discover they were instruments of profit and power.

There are amazing similarities in China, the second largest economy in the world, investigated by an expert from UCLA, Ching Kwan Lee.

Lee compared the anger and despair of the working class in the discarded industrial sectors of the United States with what he calls China's industrial zone: the state-owned socialist industrial center in the northeast, now abandoned by the development of the fast-growing area in the southeast.

Inboth regions, Lee found massive labor protests, but with different characteristics. In the abandoned industrial area, workers express the same sense of betrayal as their counterparts in the USA and in their case, the betrayal of the Maoist principles of solidarity and dedication to the development of the society that they considered a social pact, only to discover that, whatever it was, now it is a bitter fraud.

In the whole country, scores of millions of workers separated from their work units "are seized by a deep sense of insecurity" that engenders "fury and despair," writes Lee.

Lee's work and studies of the abandoned industrial zones of the United States make clear that we should not underestimate the depth of moral indignation that lies behind the angry bitterness, the self-destructiveness, regarding the government and corporate power.

In the United States, the populist movement called Tea Party - and more so in the wider circles that it reaches - reflects the spirit of disillusionment he thinks. The antifiscal extremism of the Tea Party is not as immediately suicidal as the protest suicide of Joe Stack, but nevertheless it is suicidal.

Currently, California is a dramatic example. The largest public system of higher education in the world is being dismantled.

Governor Arnold Schwarzenegger says he will have to eliminate state programs for health and social care, unless the federal government supplies some 7,000 million dollars. Other governors are joining him.

Meanwhile, a recent movement for states' rights is demanding that the federal government not meddle in their affairs, a good example of what Orwell called "double think": the ability to have two contradictory ideas in mind while believing in both, practically a motto of our times.

The situation of California is the result largely of a antifiscal fanaticism . It is very similar elsewhere, including in wealthy suburbs.

Encouraging antifiscal feelings has been characterized in business advertising. People have to be indoctrinated to hate and fear the government for a good reason: of the existing power systems, the government is the only one who, at first occasionally and in fact answers to the public and can limit the depredations of private power.

However, the antigovernment propaganda must be nuanced. Businesses, of course, favors a powerful state that will work for multinationals and financial institutions, including rescuing them when they destroy the economy.

But in a brilliant exercise in double-thinking, people are led to hate and fear the deficit. In this form, the business partners in Washington could agree to reduced social benefits and rights such as social security (but not rescuing them).

At the same time, people should not object to what is largely creating the deficit: the growing military budget and a completely ineffective privatized health care system .

It's easy to ridicule those such as Joe Stack and others like him for expressing their concerns, but it is much more appropriate to understand what is behind their perceptions and actions at a time when people with real grievances are being mobilized in ways that represent a great danger to themselves and to others.

Noam Chomsky is professor emeritus of linguistics and philosophy at the Massachusetts Institute of Technology, Cambridge, Massachusetts