In the Lukhovitskii region in the Moscow oblast, three medics have been sent to court. They are accused of negligence and unprofessionalism, as a result of which three-year old Vania Orlov has been left disabled. 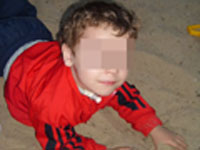 The incident took place on 25th December 2008. Resident of the Lukhovitskii region Natalia Orlova noticed that the flat battery, similar to a coin, had disappeared from her television remote. Meanwhile her son Vania had begun to cry, was refusing to eat, and then started to suffocate completely.

Natalia called an ambulance. Medics decided that the child had tonsillitis. They recommended the illness be treated with tablets, and left.

But the boy’s condition worsened towards evening. Natalia rushed to the Lukhovitskii central hospital with little Vania in her arms, and asked doctors to examine the boy. The woman was met by a surgeon, Aleksandr Ivanov, and the chief of hospital admittance, Elena Motyrova.

Elena Motyrova assured Natalia that the boy had typical signs of tonsillitis, dismissing the possibility that he had swallowed a battery as ‘nonsense’.

Doctors placed Vania in the infectious diseases ward. They did not begin to examine the child: the medics were celebrating the approaching New Year, and doctors were hurrying to return to the table. Vania was only given an X-ray on 26th December – when not his windpipe but his stomach was scanned.

It was only when the little boy began to suffocate before the doctors’ eyes that they sent him for an X-ray of the chest area: they suspected pneumonia.

On 31st December, X-ray technician Shestakova took an image and detected a strange round object. But because she did not know the reasons for which the boy had come to the hospital, but was looking for pneumonia, she took the battery in his windpipe for… a medallion on the boy’s neck. A radiologist, Iurii Andreev, saw the X-ray only on 2nd January. Observing the foreign object, but not detecting pneumonia, he did not raise an alarm – and only recalled the X-ray when the child began to die. By this time, the battery had begun to leak acid. Electrolytes had seeped out of it and burnt the boy’s esophagus, windpipe and vocal cords.

The simple operation to remove the foreign body from Vania’s windpipe was carried out on 5th January in the ENT department of Moscow Region Scientific Research and Clinical Institute (MONIKI). But the child’s health had already been seriously undermined.

“My little boy went through clinical death and has been under anesthetic 60 times“, Natalia Orlova says. “Now he has a tube in his windpipe, in his stomach, in his esophagus… A long course of treatment lies ahead of him, as well as several operations to restore his esophagus and vocal cords.”

Natalia Orlova has already spent around 800,000 rubles on treatment for her son. The boy, though, remains unable to speak, and weighs just 10 kg as a result of his inability to take in food independently.

In the last few days, the Lukhovitskii public prosecutor’s office confirmed the charges faced by the medics. The head of admittance, doctor and surgeon Elena Motyrova, and the head of Radiology and Instrumental Diagnostics, Iurii Andreev, will be charged with “negligence resulting in serious damage to health”. They are threatened with 5 years in prison.

Children’s surgeon Aleksandr Ivanov, meanwhile, could receive 4 years on the charge of “causing serious damage to health due to lack of care and failure to carry out professional duties”.