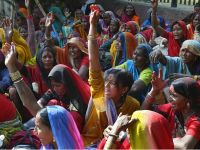 India is about to become the first country in the world where women will be guaranteed by law a third of the seats in all legislative bodies in the country. The project ley managed to win a first hurdle in early March, to obtain the approval of the Senate (Rajya Sabha) and, although it still must be approved by the Lok Sabha, or lower house, its supporters are already singing victory.

And no wonder, because for them it is a milestone in the history of a society that has been sexist for centuries, as evidenced by the 14 years it took the proposal to open step in the tangle of legislation, before coming to a vote.

Although this time there were also controversies, heated arguments and even baiting events in the upper house, in the end negotiator skills were imposed by the president of the ruling Congress Party, Sonia Gandhi.

The widow of assassinated prime minister Rajiv Gandhi is among the few women in high political office in India, where females make up half of the approximately 1 billion 200 million inhabitants of the country, and 40% of its constituents. Besides Sonia, the short list includes the President Pratibha Patil and leader on the House floor, Meira Kumar, while at the state level there is chief minister of Uttar Pradesh, Mayawati Kumari.

The forerunner of them all was Indira Gandhi, first and only woman to hold the post of prime minister in India, not once but twice (1966-1977 and 1980-1984). Only 58 of the 545 lower house seats and 21 out of 250 of the Rajya Sabha are occupied today by women, which further supports the political discrimination suffered by the evil concept called the "weaker sex" in the South Asian country.

On a social level, inequality is rampant, as admitted by the Prime Minister Manmohan Singh in the heat of the debates over the bill on parliamentary quotas. According to the head of government, there is still much to do in a country where the maternal mortality rate is extremely high as a result of poor pregnant women who have no access to health services. Figures handled by international agencies speak of 300 maternal deaths per 100 thousand live births.

“Female illiteracy is 20% higher compared to men, whereas in labor, participation of women is only 25%,” he added.

That is why for Singh, the recent vote in the upper house represented an historic step towards the emancipation of Indian women. Senator of the Communist Party (Marxist) of India, Brinda Karat, considers for her part, that the reservation quotas for parliamentarians will help change the culture of a country where women, she said, are prisoners of the culture.

“In the name of the tradition, there are stereotypes imposed on us against which we must fight every day,” said the parliamentarian.

Perhaps without meaning to be a discordant note, but perhaps a rather more pragmatic approach offers the best conclusion offers the writer, Rupa Gulab, for whom a seat in Parliament does not necessarily grant more power to women. Something in compensation, yes, we take advantage of with greater access to education.

Nestor Marin is correspondent to Prensa Latina in India.