Mexican Struggle Against the Blockade on Cuba

The Mexican Movement of Solidarity with Cuba coordinates actions to be developed in 2010 to demand an end to the blockade imposed by the U.S. government to that Caribbean nation. The national meeting is in the fifteenth stage of discussions with the participation of hundreds of delegates from territories such as Oaxaca, Guerrero, Colima, Michoacan, Baja California del Sur, Puebla, Estado de Mexico, Chiapas, Jalisco, Nayarit, Zacatecas, San Luis Potosi and Federal District. 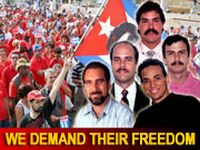 Mexican Struggle Against the Blockade on Cuba

A document will be submitted during the afternoon for the approval of participants that will define the goals of the solidarity campaign for 2010, a conformed text from proposals submitted by organizations and citizens attending the event personally. One of the members of the coordination Movement, Jesús Escamilla, confirmed to Prensa Latina that the points resolving the forum also will trace guidelines "on how we can strengthen the struggle for the liberation of Gerardo Hernandez, Antonio Guerrero, Ramón Labañino, Fernando González and René González, five Cuban political prisoners in the United States."

Arrested in Miami on September 12, 1998, "The Five" as they are known internationally, are incarcerated despite their innocence, "they are victims of prejudice and the hatred of the anti-Cuban community, the authorities in Miami and the government United States against the Cuban Revolution, "says a text released by the delegates. The journey will begin this Sunday with an analysis on the challenges and possibilities of the revolutionary process in the largest island of the Antilles, targeting the prospects for socialism in the XXI century.

This will give continuity to the conference held yesterday by the Cuban ambassador to Mexico, Manuel Aguilera, on the duration of the Revolution, its history of resistance, economic outlook and development. Headquartered in the House of Culture of Morelia, the fifteenth meeting will end today with the assurance "that everything possible will be done for Cuba, because much has been received," as the teacher Irma Valdivieso, Oaxaca, thanked Cuban health care workers for their special training in assisting the children with special needs.