An exhibition of the worst presents received by local residents opened its doors in Yekaterinburg last week. Women consider towels to be the worst presents, while men detest getting socks and underwear as gifts, ITAR-TASS reports. 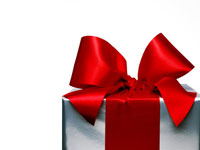 The same day, the results of the competition for the most original present will be announced. The jury chose 10 winners who will be awarded with tickets to psychology trainings where they will be taught what presents are the best to give, how to give them and how to impress the recipient.

The exhibits were provided by residents of the Sverdlovky region of Russia. Among extravagant presents was a Playboy given to a young man by his parents. Handing the exhibit to the organizers, the young man said he was very embarrassed to receive this present from the parents.

Another unusual present was the money that belonged to a woman from Yekaterinburg. The woman’s husband was laid off on the eve of her birthday, and she gave him some money so he could get her a birthday present. On her birthday, the woman received a card with her own money enclosed.

Specialists believe that to give the best present, we should consider people’s subconscious reactions. Positive reaction and satisfaction brought by a gift have nothing to do with the gift’s price. If a person is indifferent to something, high price will not change the reaction to it.

Researchers debunk the popular theory that small but excellent presents are the best. They found that a positive emotional reaction to a gift is proportional to the gift’s size. The larger the gift in size, the happier is the recipient. The researchers believe that it is a subconscious reaction.

Scientists developed a list of rules that can increase the positive effect from a present. When choosing between a gift certificate and the actual present, choose the present. The researchers think that subconscious mind is easy to fool. If you put your present in a big box stuffed with tissue paper and wrapped in bright paper with a big bow, you can expect the recipient to be happy.

Psychologists do not recommend giving impersonal presents like the ones people exchange at work, such as organizers, flash drives, or candy. You would also be better off not presenting kitchen appliances, psychologists warn.