According to the 2010 Forbes magazine ranking of the largest fortunes in the world, Mexico's Carlos Slim Helu overthrew the American Bill Gates for the status of "the richest man on earth." That is, since 1994, the first time that Bill Gates lost the glamour of the richest man in the world. 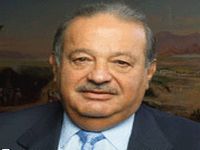 Now, in order, the three most wealthy in the world are Carlos Slim Helu, with a fortune estimated at $ 53.5 billion, followed by Bill Gates with $ 53 Billion, and Warren Bufett with $ 47 billion.

Slim owns the telecom operator Telmex, Bill Gates Microsoft and Buffet a mega investor and founder of Berkshire Hathaway. The best Brazilian on the list is Eike Batista, the eighth on the list, who has a fortune estimated at $ 27 billion. He works in the area of oil and gas, mining, energy and yards.

I was surprised by the fulminant rise of Eike, who last year, in 2009, was 61st in the ranking, with a fortune of U.S. $7.5 billion, and this year jumped to eighth with $27 billion in his pocket. In one year, the fortunes of Eike Batista increased $19.5 billion, according to Forbes.

According Eike himself, "Brazil is one of the best places in the world to do business." All Batista companies bear the letter "X" in the name, in reference to the mathematical multiplication sign.

This year, the number of billionaires in the world rose from 793 last year to 1011. However, it remains below the 1125 recorded in 2008. According to Forbes, "currently the world's billionaires have an average of $ 3.5 billion, representing an increase of $500 million over the last year.

The Forbes ranking includes 97 people who entered the annual list of billionaires for the first time, including 62 from Asia, which are making their debut in this coveted economic and financial status. Asia has experienced a strong recovery of stock markets and many stock offerings last year. Now, Asia is closer to Europe in the number of billionaires, with a difference of only 14.

China, with 64 billionaires, first appeared after the U.S., with 403 billionaires. Russia is third with 62 billionaires, many of them returning to the rankings after they left last year due to falling commodity prices.

Eleven countries have at least twice as many billionaires as to what they had in 2009, and there were a record number of 164 people returning to the list of billionaires in 2010.

The fourth richest in the world is India's Mukesh Ambani, worth $29 billion, the fifth is another Indian, Lakshmi Mittal, with $28.7 billion. Ambani controlled Reliance Industries, a company with greater market value in India, and Mittal chairman Arcelor Mittal, the world's largest steelmaker.