Chinese woman Zhang Ruifang, aged 101, has become a star in her Linlou village, Henan province. The elderly woman grew a horn on her forehead, above her left eye a year ago. Now the woman grows another horn – above the right eye, Express Gazeta wrote. 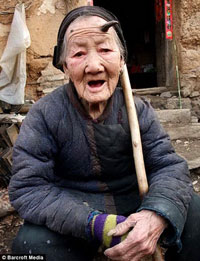 It all started with the appearance of a small pimple, which the old lady ignored. However, the pimple grew into a 2.4-inch horn like that of a goat. Another pimple appeared on the woman’s forehead symmetrically to the horn.

The woman attracts a lot of attention: residents of neighboring villages visit Linlou to take a look at the devil’s horn.

Zhang says that she does not feel any discomfort about the horn. Her six children fear that their mother would eventually turn into a goat, The Daily Mail wrote.

Her youngest son, a 60-yearold-man, said that the second horn was growing faster than the first one. The children also worry that they could inherit the bizarre abnormality from their mother.

The woman has not seen a doctor yet. Local medics say that there is nothing supernatural about the old lady’s horns. The phenomenon is known in medicine as the cutaneous horn.

This is a funnel-shaped growth and although most are only a few millimetres in length, some can extend a number of inches from the skin.

Cutaneous horns are made up of compacted keratin, which is the same protein we have in our hair and nails, and forms horns, wool and feathers in animals, The Daily Mail said.

They usually develop in fair-skinned elderly adults who have a history of significant sun exposure but it is extremely unusual to see it form protrusions of this size.

The growths are most common in elderly people, aged between 60 and the mid-70s. They can sometimes be cancerous but more than half of cases are benign.