Everyone knows the names of Gagarin, Titov, and Leonov. Yet, their flights would not have happened without the work of those who tested the equipment and limits of human body and mind. 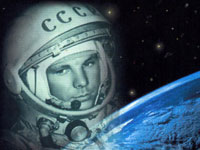 The names of these people would only sound familiar to specialists. They were always in the background and never traveled to space. Extraterrestrial, hell-like conditions, were created for them in Moscow, not far from the Dinamo stadium.

Fifty years ago, in February of 1960, training of the first division of spacemen was commenced. Six candidates were chosen, and one of them was to travel to space. It meant that the chosen person would travel to the unknown. It was impossible to foresee how a human being would be affected by zero gravity and extreme stress or how the spaceman would react to the panorama of endless space. Scientists had serious concerns that the spaceman would lose senses and would be unable to operate the spacecraft.

Volunteer testers and scientists from the State Research Test Institute for Aerospace Medicine (GNIII) who observed them were to determine the limits of human body. The Institute was the only establishment in Russia allowed to perform tests on human beings. The respective decree was signed by Stalin in 1949. “This decree is still in effect,” said Vladimir Ponomarenko, M.D., chief research officer. He began his career in the Institute as a graduate student and is now the chief research officer and a Medical Service General. “The tests were conducted on a centrifuge, in a compression chamber, thermal chamber, and soundproof chamber (a room completely isolated from the external world). The stress load was intentionally bigger than what it was foreseen for space travel. It was done to determine the acceptable limits and create necessary defense for the body. Only tests could answer the questions we had.”

For example, scientists had to know the angle for placing a chair in a way that the spaceman could withstand the so-called heavy landing, and the maximum speed the spaceman spine could withstand without breaking. For the test, a chair was located between two 14-meter tall masts. The chair would fall on a concrete landing with shock absorbers. Various types of soil were imitated, e.g., soft, semi-soft, or stiff. During the experiment, only four test volunteers agreed to be subjected to tests with serious stress loads. Yet, in the testing process three of them refused to participates in further tests because the stress load constantly increased. The remaining brave heart was John Gridunov, a freelance GNIII tester. He set the world record in this extreme “sport”, which has not been broken yet - 50g (free fall acceleration). This is equal to your body becoming 50 times heavier.

John Gridunov is a legendary person in the Institute. He was named after his father’s favorite writer, John Reid. Gridunov performed tests that everybody else refused to perform. “He always pushed his limits and produced record results. He demonstrated what a Russian man was capable of. And he always asked “What was Americans’ result? Ours will be higher!” He had extremely good health and strong will, and an outstanding sense of humor that was vital for our work.”

Now Gridunov has problems with his legs and can barely walk. It very well may be a consequence of the tests 50 years ago. His other record was sustaining a 18.5 g centrifuge acceleration in the spine-chest direction without related accommodation. It is equal to your body gradually gaining weight to reach 1.5 tons. “I felt my face burning, it felt flat like a pancake, my cheeks lowered below my chin, and my chest felt like something very heavy was placed on it and was about to smash me,” John recalls. “Then I saw black sky and the stars, I lost consciousness. The centrifuge stopped, they took me out of it, I was covered with blood. It turned out I had a nose bleed, but I didn’t even feel it.”

Spacecrafts designers were concerned with a possibility of an accident involving loss of pressure at high altitude. Fast loss of pressure would make the blood boil, causing immediate death. Special pressure-suits were designed to avoid it. Volunteers were the ones to test the suits. “A tester dressed in a suit was placed in a compression chamber. Then the air was quickly pumped out, creating the pressure equal to the pressure at the altitude of 40 kilometers. Water in the bulbs would boil. A minimal deterioration in the suit would cause immediate death. All our research officers in charge of the experiment had grey hair. Once a committee stopped by to evaluate our work and asked “Why do you have so many old people? It’s time to reorganize your team.” Then I brought them closer to the compression chamber and showed the experiment. They were afraid to look at it! And I said: “I can’t trust anyone with this work. It requires experience, intuition, and compassion.” None of the experiments guarantee 100% success. By the way, John Gridunov confessed that at times he felt that his blood started boiling.”

Ponomarenko himself once volunteered for an experiment with loss of consciousness. “It was unclear what the premonitory signs of this state were, what a person felt and how fast the recovery was. I decided to test it on my own skin. This information was later used to train pilots and spacemen.”

When on March 15, 1965, the crew of Belyaev and Leonov landed in the snowy taiga and it took 48 hours to find them, it was decided to test volunteers in extreme places where they would strive to survive. Once, Gridunov spent 13 hours in ice cold water, testing a wetsuit. The best expert in extreme trips was Alec Mnatsikanyan, a doctor and sky diver, survival expert. He traveled to taiga, desert, the high north, and then provided recommendations to spacemen on how to efficiently use water in the desert, what to do in the polar tundra to warm up, etc.

Another remarkable experiment was modeling a trip to the Moon in an emergency situation. Three testers wearing pressure suits were placed in compression chambers. In was very hot inside the suits, and the testers had to breath pure oxygen, while liquid food was supplied via tubes. There were not allowed to have bowel movements under the experiment. The trip to the Moon and back takes 7 days. Two testers “fell out of the race” on the second day. Naturally, the one left was John Gridunov. “It was so hot that I was sitting in a puddle of my own sweat. I lost sense of time. Once during feeding I was given an extra splash of cottage cheese and it smeared all over my helmet. It was so hot that the cottage cheese spoiled in a few hours and for several days I had to breathe a horrible stench. Another time they shut off the air supply. It turned out it was another emergency situation. But I managed to survive in there for 8 days instead of 7.”

“We appealed to the government with a request to award him with a title of the Hero of Russia. The appeal was signed by Leonov, Popovich, and other respectable people, including spacemen and academics. For some reason, we received a rejection. But Gridunov has done so much for Russian space industry,” says Ponomarenko. He is also concerned about the future of his alma mater. The Institute is planned for relocation. It means that it would take years to put the stands and equipment back together. It means that training of pilots and testing of new equipment will be suspended. “It will be catastrophic for the military sector and deadly for the Institute,” Ponomarenko is convinced. Being the person who imitated catastrophes in the lab, he is now eager to prevent a real one.