Yelena Andreeva, a resident of Novocherkassk, Russia, gave birth to a record-weight baby, 12lbs and 22.4 inches. The baby named Maxim was too big for his newborn outfits. Now the mother and the baby are observed by doctors in the city of Rostov-on-Don, because children of this size are, albeit a small, abnormality. 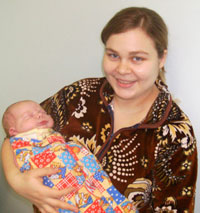 “I have no idea why he is so big. My husband was 10lbs when he was born, but it is still smaller than the baby. I was told that the baby would be a big one a month before the labor, and had to go to the regional hospital,” says the happy mother.

Maxim was born via a C-section because the doctors did not want to take risks. He is now eating well, but breast milk is not enough for him, so he is given formula.

“We haven’t had babies that big for a while,” says Alexander Shokarev, a pediatrician with nearly 40 years of experience. “An average weight of a baby is approximately 6-7 lbs. A baby of 7.7 lbs is considered large.

Surprisingly, another large baby was born in another Rostov-on-Don maternity house. The baby named Ivan Nefyodov was born 12lbs and 21inches. He is healthy and was recently released from the hospital.