More than three thousand delegates from 60 countries, including a score of ministers that have confirmed to date, will converge in Cuba, the world capital of university education , on Monday (08/02), for five days.  Shortly before the official opening of University 2010 on Monday, 14 pre-conference discussions will develop, including the universalization of higher education in Cuba, close to graduating its first million since the Revolution in 1959. 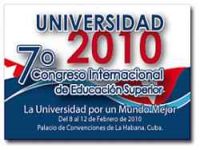 Among the forum participants that session here until Aug. 12, are also principals of 215 centers of higher learning around the world, 45 presidents of rectors' associations and representatives of international organizations.

A demonstration of the interest aroused by the meeting is the presentation of 2,123 conferences, of which 1,563 are foreign to be discussed at the event, the seventh one since the beginning in 1998.

To build such a conference, with a wide variety of criteria on the role of universities in society, 13 workshops sessions were organized parallel to the Congress established at the Habaneros Convention Palace.

The quality of teaching and the impact of post graduate education are among the topics discussed by participants and the Assembly of the VII Ibero-American Network for Accreditation of Higher Education.

A meeting of professionals that graduated in Cuba will also be held, during which they will exchange the experiences of former students, and visits have also been scheduled to Cuban universities such as Computer Sciences and Medical Sciences, both in Havana.

In May 2004, the Commission for Assistance to a Free Cuba produced a comprehensive report for dismantling Cuba’s democracy and superior education system, but it was forced to admit the truth despite themselves. They had to commend it as superior, Cuba’s universal education system and attendance, universal literacy, female representation, and superiority in science, chemistry and medicine.

Cuba remains one of the few countries totally dedicated to gender equality in education.

Cuba is the Latin American country which best meets the goals of access and quality of education established by UNESCO (UN Educational, Scientific and Cultural Organization). In a list of 128 countries, the island is in 14th place, ahead of developed countries such as Spain (17), Switzerland (20) and Belgium (23). The first three on the list are Norway, Japan and Germany, respectively. Brazil is in 88. United States and Canada were not listed.