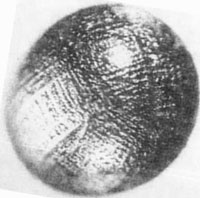 There are opposing opinions. V. Psalomschikov, an expert on aircraft crashes, and a well-known journalist, stated that the object was manufactured in the USSR, the technology to produce it dates back to 1970's, and that he has similar ultra thin filaments in his possession. However, a Soviet probe would self-destruct immediately, whereas the object reportedly did try to ascend several times. Actually, Psalomschikov believes the crashed object was a Soviet-built intelligence remotely piloted vehicle.

A Russian ufologist and scientist, Gennady Belimov, presented information in 1993 that a Soviet military probe had crashed at the Hill 611. His proof was based on similar crashed of highly classified Soviet probes, and he concludes that ufologists misinterpreted the probe which to be a UFO crashed in the Far East. As for the lead collected at the site, Belimov believes it was extracted from the Kholodnensky deposit in the Northern Baikal region.

A new generation of Russian UFO researchers have reached a conclusion that the probe was an aerostatics reconnaissance vehicle possibly equipped to make infrared photographs. The speed of the probe was estimated to be approximately 54 kilometers per hour, which would negate Dr. Dvuzhilni’s data. But even among them there is no consistent belief as to the origin of the probe. Vladimir Smoly, for example, does not believe there was a thermite self-destruction device aboard the probe. The self-destruction would be expected to be immediate, unlike to what had happened at Height 611 to the crashed object.

Was this a NATO probe? V. Psalomschikov mentioned that previously the NATO reconnaissance balloons did contain trotyl (TNT) self-destruction devices. One such apparatus fell on a house in the USSR and “self-destroyed” it; fortunately, there was no one inside the dwelling at the time. The Soviets raised hell, the scandal was heard even in the UN, and since that time the NATO probes contained only thermite self-destruction devices. Smoly believes the object was aerostatics apparatus created for entertainment purposes. However, M. Gershtein indicated that the object had a clearly defined trail, and could not have been a balloon moving at the speed of the wind carrying it.

Would the military later stage fake "UFO" flights to confuse and mislead ufologists, and the Western intelligence services? The objects observed on November 28, 1987 consisted of different shapes: cigar-like, cylindrical, and spherical. Their flight was noiseless, smooth, at various altitudes. Actually, not one of the eyewitnesses (including the police) mistook them for UFOs. The impression was that they observed some aircraft, or falling meteorites. While in flight, the objects affected power lines throughout the area.

Lieutenant Zhivayev of the Interior Ministry troops described the object he observed as a flame with a lusterless sphere in the front and a reddish ball in the rear. And the workers from the Bor Quarry-Bistryancev, Anokhin, Grigoriyev-reported a giant cylindrical object at an altitude of 300 meters. Its fore part was illuminated-like melting metal. There are many other witness accounts in the Dvuzhilni report. To remind our readers, the area of the crash is not that far away from the Tunguska Phenomenon site.

Something else, heretofore unknown in the West, took place in the region, that could shed some light on both incidents.

Alexander Rempel published his report in Priroda newspaper (Vladivostok) in July of 1991. A fiery object was observed over the Khabarovsk city on August 24, 1978, at night. It was about a meter and a half in diameter. At one point in its flight, it emitted a hissing (or wheezing) sound, like a jet engine does. The area around it became illuminated, like daylight. The object descended slowly, and lit up brightly. The soil, albeit full of water, burned up. Coal-like pieces were found in the area, they had holes and glass-like structures. For ten years thereafter the soil remained unchanged, and nothing grew at the site of the explosion.

The eyewitnesses reported that a dark object flew away just before the explosion. It was not found. Ten years later Rempel and his colleagues received numerous reports about an anomalous zone near Khabarovsk. Few explorers who have returned from the area confirmed that the object fell there, and that fantastic things have been observed there. Yet at the time Rempel could not confirm their reports: the military had sealed the area off. But his group was able to research the area of the Dalnegorsk Object alleged fall after it flew off the Hill 611. They found out about unusual animal mutations.

Russian newspaper Komsomol'skaya Pravdain its December 1, 2000 issue published an article about the Dalnegorsk case (NLO svili v Primorje gnezdo). Most interesting was Andrey Pavlov’s (the author of the newspaper article) reference to the fact that in the early 1990s Russian generals from the anti-aircraft forces became concerned about the UFO activity in the area, and contacted local UFO researchers. An exchange of information ensued. It is newsworthy when a major Russian newspaper mentions such fact (the author actually quoted Dr. Dvuzhilni, the chief investigator of the Height 611 UFO crash).

According to Alexander Rempel (NLO Magazine, 1999) very few Russian ufologists recall the crash, or pay attention to it.

Alexander Rempel informed participants of the UFOMIND Russian UFO Forum that fragments of the crashed object have been examined in Vladivostok, Khabarovsk, and Munich, Liege and other places. In 2000, four Japanese and Korean expeditions examined the Height 611.

Ufologists from Korea and Japan have made offers to purchase the “balls”. The current price for one gram of any fragment is $500.00, and the price has been going up. There are offers of $1,500 per gram, but the demand exceeds the supply. Rempel is aware that there have been numerous conclusions of a number of institutes and laboratories in Russia and abroad, and yet all of them differ from each other. There is no final conclusion that the object was made on Earth, but at the same time, there is no definite conclusion that the object was of extraterrestrial origin. Some peculiarities of the object still cannot be explained. Since 2000 there has not been anything anomalous in the area. But Russians ufologists show little or no interest in the famous case, states Rempel, except for those in Vladivostok. Two exhibits of the Height 611 incident have been made and are active; one is in the Dalnegorsk museum, and the other in the UFO Museum in Vladivostok.

There are hundreds of witnesses, and dozens of the actual eyewitnesses, and many drawings of the incident, but there are no photographs. Numerous “kontaktyori” (those who claim to be in contact with extraterrestrial civilizations) had made predictions that never came true, claimed to be in contact with alien civilizations, wrote books and made paintings of the event. They even claimed that a UFO would land at the Dalnegorsk stadium. This prediction had attracted attention of a great number of Russians, thousands of them arrived in Dalnegorsk, but nothing happened. Some of those who had arrived to meet the aliens still remain in the Dalnegorsk mental asylum.

The RUFORS Round Table members (Anatoly Kutovoy and others), as well as Vladimir Smoly’s UFO Forum participants, have discussed the case, and actively exchanged scientific information about it. As for the Russian media, it has paid some attention to the crash recently, too.

We must mention another interpretation of the Dalnegorsk crash. It was published in Soviet newspaper Ribak Primorya (Issue 14, 1991). The author of the article about the Dalnegorsk Object was Y. Vasilyev. He states several interesting points. According to him, V. Dvuzhilni and a group of his students arrived to the site of the crash. They searched the area three times, quite thoroughly, and found tiny metallic drops. All required measurements were taken, and took photographs.

Then they initiated physical and chemical analyses of the findings. The temperature of the melting was 390 degrees. Silvery metal was very soft; it was easy to break it with a pair of tweezers. On February 8, 1986, V. Dvuzhilni and V. Berliozov, a geologist (who had studied the Sikhote-Alin’ meteorite) again ascended the hill. The geologist confirmed that the crashed body was of a cosmic origin, and the traces affirmed this. Its luminescence was similar to that of usual meteorites. Five years later, V. Dvuzhilini came up with further details (“fantastic details”, according to Y. Vasilyev).

Then the author comes up with his own hypothesis. On January 28, 1986, American shuttle Challenger exploded in the sky. The force of the explosion was such that the fragments were thrown all over the Atlantic. It is possible that one of the fragments, flying from the southwest, landed in Dalnegorsk the next day.

There seems to a consensus of opinion that the Hill 611 crash may well a conventional explanation, but exactly what remains to be seen. It does have its parallel’s in the West, the Roswell case being one of them, but there are others. Irrespective of this, it is a fascinating case, which is sure to divulge more information and more theories in the years to come.