The United Nations Organization recognizes that in post-disaster scenarios, the most effective way to protect human rights and the most vulnerable members of society is to involve women in the relief process, due to their natural capacities and capabilities – despite recognizing that they are also most in need at such times. 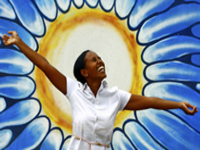 CEDAW, the UN Committee on the Elimination of Discrimination against Women, recognizes that after disasters occur, the natural capacities of women as caretakers of children, the elderly, injured and disabled affords them a critical role in early recovery and in implementation of long-term sustainability mechanisms.

Naela Mohamed Gabr, head of CEDAW, stated yesterday that “The needs and capabilities of women must be taken into consideration in all sectors and clusters of the emergency response” however, the UNO must provide them with the protection they need to perform the task, because “whilst the strength and resilience of women are in high demand following such emergencies, they cannot adequately fulfil these roles if their basic needs are unmet and if decision-makers ignore them”.

Ms. Gabr recognized also that at times of increased stress and lawlessness, women are also the most vulnerable members of society.

The UN’s World Food Programme has also launched a new scheme focusing on women in food distribution operations, providing them with vouchers which are coloured and dated and which can be exchanged for food on determined days and at certain places. Natasha Scripture, WFP spokesperson in Port-au-Prince, claims that “WFP generally targets female heads of household with food assistance. Distribution to women tends to be more orderly and calm,” while stating that “women are often the first ones pushed out of line”.

Where such policies have been implemented, the UNO has noted that distribution is far more orderly and proceeds without the frantic scrambles which often turn violent.

The out-going Chilean President Michelle Bachelet will now be working alongside UNIFEM to advocate for the needs of Haitian women. UNIFEM is the women's fund at the United Nations. It provides financial and technical assistance to innovative programmes and strategies to foster women's empowerment and gender equality.

Throughout her Presidency, Michelle Bachelet highlighted women’s issues and has committed herself to providing a leading role in engaging international cooperation, especially in Latin America, for the women of Haiti and in formulating a common strategy to “include the voices and perspectives of Haitian women in the recovery efforts” (UNIFEM).