A shocking story took place in China. A nine-year-old girl gave birth to a healthy baby in Changchun Hospital in China’s northeastern province of Jilin. Doctors performed Cesarean section on the little mother after she started having contractions. 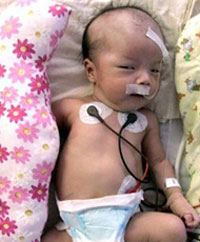 The baby-boy was born weighing 2.75 kg. Medics said that both the mother and child were “fine,” China’s City Evening News portal said.

The medics of the hospital did not give any other comments to reporters. No wonder, because the subject of early pregnancy is tabooed in the communist country.

A correspondent of a local newspaper penetrated into the hospital twice in an attempt to see the young mother, but his efforts returned no result. He only managed to find out that the girl looked older for her nine years. Nothing is known about the details of the child’s pregnancy.

The police are trying to find the father of the girl’s child – they have already questioned the members of the young mother’s family. A sexual relationship with females under 14 years of age is considered a severe sex crime in China.

Statistics says that Chinese girls get pregnant and subsequently try to make an abortion a lot more frequently than it is believed. Chinese schoolgirls make about 30 percent of all abortions performed in the country. Female college students add another 20 percent to this number.

In 1910, a Chinese boy aged 9 and a Chinese girl aged 8 became the nation’s youngest parents ever. The youngest mother in the USSR was a six-year-old girl, who gave birth to a dead child in 1930. The little girl had been raped by her own grandfather.

In April of 2000, a Russian girl from the Rostov region gave birth to her child when she was eight. The child’s father was a 13-year-old boy.

The world record for ‘youngest mother’ belongs to Peru, where Lina Medina, aged only five, delivered a baby in 1939.